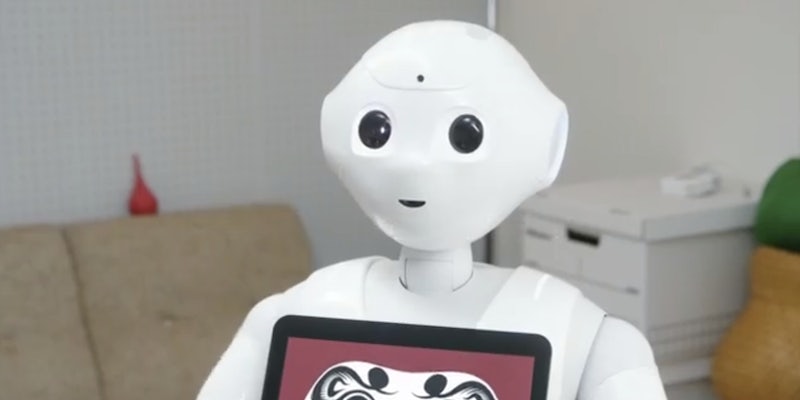 'Pepper' is being marketed as the world's first robot nanny. All things considered, that's better than getting a sitter off Craigslist.

If you’re a helicopter parent in the market for a nanny and you think Mary Poppins is too “edgy” and “aggressive,” a Japanese telecommunications company has just the solution for you. They’ve just announced the launch of Pepper, an adorable automaton who’s being touted as a “personal robot who reads emotions” and is intended for home use.

Created by telecoms company SoftBank, “Pepper” is programmed to recognize users’ emotions based on voice recognition and facial analysis and respond in kind. Basically, Pepper is designed to make you happy, which is why he’s primarily being marketed as a home companion or caregiver for children and the elderly.

Watching this video of Pepper in action, it’s easy to see why SoftBank thinks he’d appeal to that market:

How adorable is that thing? His eyes are adorable. His little herky-jerky limbs are adorable. The little robotic cooing noises he makes are adorable. Even his name is adorable. (Who’s named Pepper these days, other than pets and scrappy orphans in musicals?) He’s like a more intelligent Furby, or the Japanese robot version of Jennifer Lawrence; it’s actually impossible not to like him.

According to the folks at SoftBank, that’s exactly the point: Pepper is designed to learn his owners’ various emotions, and then adjust his behavior accordingly. If you’re sad or frustrated, for instance, he’ll try to cheer you up by cracking a joke, singing a song, or doing a dance. The more Pepper interacts with people, the more information about them he stores in a cloud-based UI, and the better he knows how to respond to various emotional cues.

That’s why Pepper is being targeted primarily to parents, with SoftBank suggesting the robot could be used as an impromptu caregiver for young children. The robot can read and play with children at home, and the company says that children who interact with the robot have more positive emotional responses to their mothers.

For readers of sci-fi dystopian fantasies, all of this raises more than a few questions; if Pepper is truly as intelligent as SoftBank claims he is, who’s to say Pepper ain’t gonna pull a T-800 on these kids and just start going bananas while he’s spoon-feeding them oatmeal and reading The Cat in the Hat? We’ll find out the answer to this question soon enough: SoftBank is releasing Pepper to the general market next February. He’ll be available for about $2500.