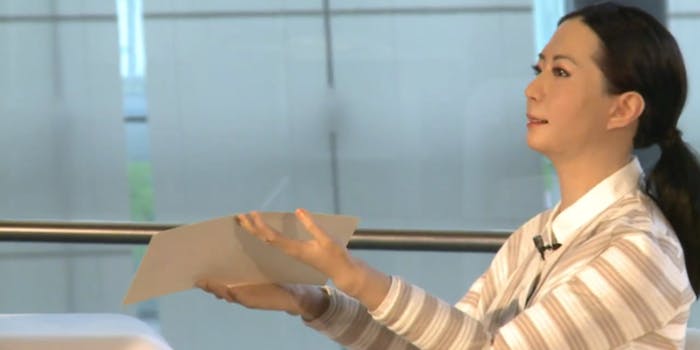 Japan debuts lifelike robots that can read the news

How soon until they're mad as hell, and not going to take it anymore?

While the Western world is contemplating a possibly murderous hitchiking robot, Japan just debuted one that can report the news.

On Tuesday, two androids were introduced in Japan by Osaka University professor Hiroshi Ishiguro, and will be on display at the National Museum of Emerging Science and Innovation in Tokyo starting Wednesday. People will be able to interact with the androids, and Ishiguro demonstrated exactly what that might look like.

Two female robots spoke to the audience in Japanese, and the younger android stated that she hoped she could have her own TV program one day, then went on to flawlessly read a news story about a tsunami. Robot journalists already exist; Ishiguro added that the robots could be effective in various professional fields, and that they’re “now becoming affordable—no different from owning a laptop.” Japan also recently debuted a robot that could babysit.

The camera zoomed in on the hands of the older android a few times, and all I could imagine was those cold silicon hands around my neck as I slept.

For now, they’ll be guides at the museum. And, maybe one day, they might report on a murderous hitchiking robot.