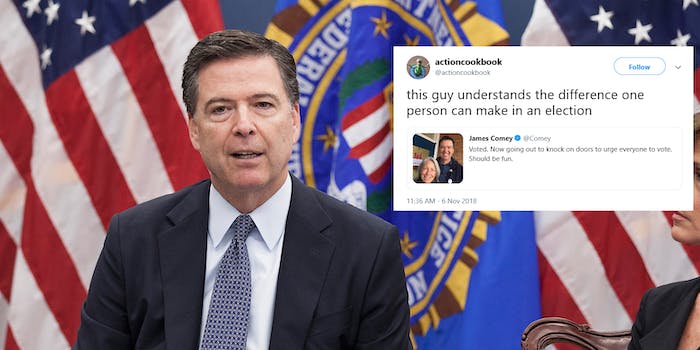 Our memory isn't that short.

Former FBI Director James Comey urged people to vote on Tuesday during the midterm elections—and it didn’t go over well.

“Voted. Now going out to knock on doors to urge everyone to vote. Should be fun,” the former FBI director wrote on Twitter.

Voted. Now going out to knock on doors to urge everyone to vote. Should be fun. pic.twitter.com/xvofJXSPb9

Since being fired by President Donald Trump and subsequently being at the center of much controversy, Comey has become more vocal about his desire for people to vote.

In an op-ed published in the New York Times on Tuesday, the former FBI director asked people to vote today to “uphold our nation’s values,” and he criticized the political climate in the country.

“I feel the giant stirring. The awakening is slow, but it is underway. Torches and death in Charlottesville. Children in cages at the border. The lying, misogyny, racism and attacks on the rule of law from our president,” he wrote. “These things poke the giant. It takes time, but the American people are stirring. They always do. And when they awaken, these fevers break very quickly.”

In July, the former FBI director urged people to vote for Democrats during today’s midterm election, arguing that Republicans in Congress had “proven incapable of fulfilling the Founders’ design that ‘Ambition must … counteract ambition.”

However, for all of his urging, Comey did not find much love online.

Some people made jokes about his infamous letter regarding Hillary Clinton just ahead of the 2016 election.

If James Comey knocks on your door, please remind him that a lot of this shit is his fault. https://t.co/73m3HZAhl6

this guy understands the difference one person can make in an election https://t.co/VR4hXBDtPK

[knocks on door in chappaqua] https://t.co/hxR1w3rwg1

Oh boy I sure hope the guy who got us into this mess knocks on MY door https://t.co/o8QJN9pLdh

Others said they would be sad to see Comey instead of other high-profile people who have decided to try and get out the vote like Oprah Winfrey and Will Ferrell.

Imagine knowing Oprah was out canvassing and you open the door and it's James Comey https://t.co/PnNbRPdqVG

Imagine if you read all these stories about, like, Oprah and Michael B. Jordan helping GOTV and then you open your front door and it’s THIS FUCKING GUY. https://t.co/DhCKqWxHxT