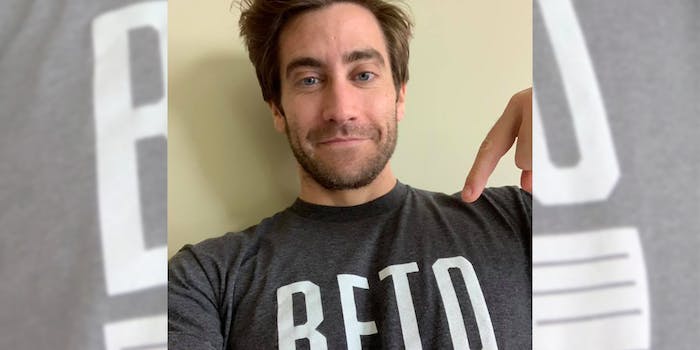 Conservative users aren't happy about this.

Another celebrity just came out in support of Rep. Beto O’Rourke (D-El Paso), Sen. Ted Cruz’s (R-Texas) challenger for the Senate. Actor Jake Gyllenhaal went viral after posting a photo of himself wearing a “Beto” T-shirt, and conservative Twitter users are throwing a temper tantrum over his endorsement.

Gyllenhaal is best known for his roles in Brokeback Mountain, Donnie Darko, Nightcrawler, Southpaw, and Nocturnal Animals, among others. Lately, he’s preferred to stay out of the political spotlight, although he expressed support for John Kerry’s presidential campaign in 2004 and shot commercials for the American Civil Liberties Union and Rock the Vote in the past.

So when Gyllenhaal does make a political statement, it’s a pretty big deal. Case in point, the actor turned to Facebook on Sunday to voice his support for O’Rourke, encouraging others to “vote for change, for compassion, for civility, for wisdom,” and to head to the ballot box to vote no matter what.

“Vote because you think the government doesn’t [affect] you or there’s no such thing as a good politician,” Gyllenhaal wrote. “Vote because you can, because we fight for rights by exercising them. Vote for Stacey Abrams and Beto O’Rourke and Andrew Gillum. Vote for Kyrsten Sinema and Jacky Rosen. Take your kids and friends and parents. Vote up and down the ballot—and if there’s no one on there that inspires now, vote anyway.”

Vote for change, for compassion, for civility, for wisdom. Vote because you think the government doesn’t effect you or…

Conservatives didn’t take kindly to Gyllenhaal’s O’Rourke shirt. The right-wing Twitter-sphere had a nuclear meltdown and collectively pointed out that he’s not a Texas resident. (He reportedly purchased a “loft-like condo” in New York City last year, according to Variety.)

Ooooo some actor telling us to vote for their choice. Let me get this straight: My body my choice, but when it comes to my ballot, you want to try to put your hands all over my ballot and our Constitution? #GTFOH#HollywoodElite#TheyDontMatter#GetYourHandsOffMyConstitution https://t.co/uXXNu6JmfZ

Damn. Another one of my favorite celebs in th can

I WISH I COULD SAY THAT I WILL START BOYCOTTING THIS HELLYWOOD ASSHAT BUT I HAVE ALREADY BEEN DOING SO FOR NEARLY 2 DECADES. NOT ONE PENNY. JOIN ME, IT FEELS REALLY GOOD AND KEEPS YOUR RIGHTEOUSNESS IN GOOD KEEPING. #WALKAWAY https://t.co/h3gNmBwxlU

Meanwhile, progressive Twitter users universally fell in love with Gyllenhaal over his support for O’Rourke.

JAKE GYLLENHAAL IS WEARING A BETO SHIRT. THIS IS THE BEST DAY OF MY LIFE. OOOOOOOFFFFF !!!!! pic.twitter.com/jGvjD5aJnJ

can jake gyllenhaal let me BREATHE i love this man!!!! YES KING pic.twitter.com/dSchCVo6jV

Me: I think I’m kinda over Jake Gyllenhaal.

this monday became infinitely better when i remembered that jake gyllenhaal is for beto. *swoon* pic.twitter.com/tEXM1eOXbt

Maybe a little too in love.

jake gyllenhaal wearing a Beto shirt made me pregnant

Y’all better not start thirsting for jake gyllenhaal now just bc he endorsed beto. Where was this energy before? He’s been mine since like 2004 and I WILL fuck someone up over him. Period.

This isn’t the first time Gyllenhaal went viral in the past seven days. After Rami Malek shot down a fan’s request to take a video together, Twitter quickly compared him to Gyllenhaal, who notoriously prefers to keep his fans at arms’ length. In this case, Gyllenhaal seems to be reaching out to make a real difference in the world, and his fandom is cherishing the moment.