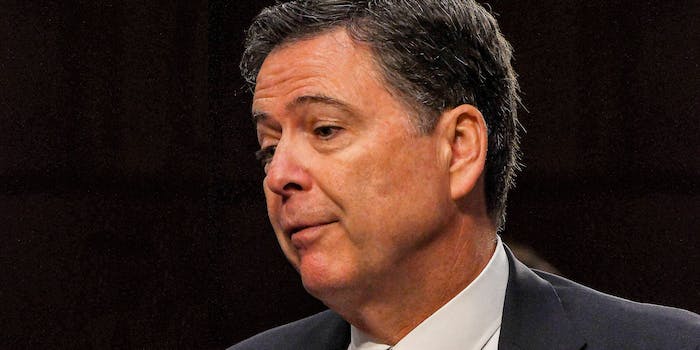 Comey says the hosts essentially gave him a 'down low, too slow.'

The Federal Bureau of Investigations released on Monday its long-awaited inspector general report, reviewing the agency’s behavior in investigating President Donald Trump in the run-up to the 2016 election.

The report found that the FBI acted without political bias in its decision to look into Trump and Russia, but did take issue with some of the tactics, such as its use of FISA to surveil a former Trump campaign official.

The day could have been considered a sort of vindication for former FBI Director James Comey, who was fired by Trump (ostensibly for his investigation into Hillary Clinton, but really for this). Instead, he wound up getting negged by Trump’s favorite TV hosts, the guys and gals at Fox & Friends.

In a tweet last night, Comey said he decided to go on the show to discuss the report, hoping to defend himself in front of a hostile panelist, in a segment sure to get the president’s attention. Instead, they canceled on him at the last minute.

“FYI: I offered to go on Fox & Friends to answer all questions,” Comey tweeted. “I can’t change their viewers on Donald Trump but hoped to give them some actual facts about the FBI. They booked me for tomorrow at 8 am. They just cancelled. Must have read the report.”

FYI: I offered to go on Fox & Friends to answer all questions. I can’t change their viewers on Donald Trump but hoped to give them some actual facts about the FBI. They booked me for tomorrow at 8 am. They just cancelled. Must have read the report.

Comey’s PR firm defended his claim too, after some in conservative media decided to accuse him of lying about Fox & Friends canceling.

How about his firm, @JavelinDC – you're good repping someone who lied about being booked on Fox?

Hi Ben. I know this is isn’t a lie because *I* booked the @foxandfriends interview for 8 am tomorrow, and it was abruptly pulled while we were awaiting car and final hit time. Will you correct? Or apologize yourself? https://t.co/N8VTQjj69h

Either way, Comey can take solace in the fact that Trump seems poised to fire another FBI director, who can then also get dumped on by Fox & Friends.

I don’t know what report current Director of the FBI Christopher Wray was reading, but it sure wasn’t the one given to me. With that kind of attitude, he will never be able to fix the FBI, which is badly broken despite having some of the greatest men & women working there!