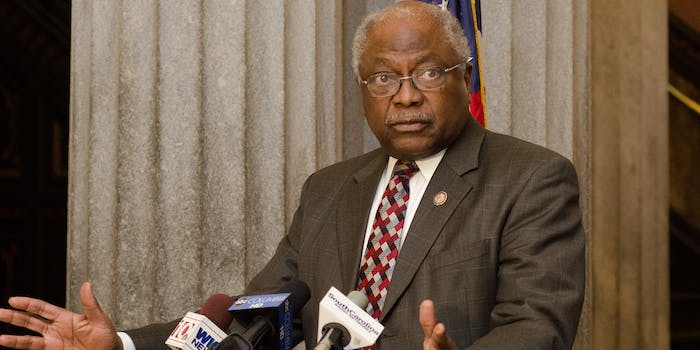 Every once in a while, C-SPAN viewers get to watch something that makes the network’s gavel-to-gavel coverage of corn subsidy debates almost boring by comparison. On Aug. 30, that something was a senior House Democrat mistakenly advising constituents to distribute lewd photos of themselves.

Representative James Clyburn (D-S.C.), the Assistant House Democratic Leader and third-ranking member of the House minority, said “sexting” during an open-phones session at the 2014 National Book Festival in Washington, D.C. (He likely meant to say “texting.”) Unfortunately, the microphone only picks up what you say, not what you mean to say.

“Clyburn, 74, told an anguished caller that Americans concerned about the Michael Brown and Trayvon Martin shootings should employ Twitter, Facebook and ‘sexting’ to organize,” The Daily Caller reported on Thursday.

“We’ve got great tools to communicate about everything else,” said Clyburn, the author of the book Blessed Experiences: Genuinely Southern, Proudly Black. “We can, uh, text. Uh, what do we call it? Sexting. Let’s do some voting, uh, uh, organizing over the internet. We’ve got the tools.”

Clyburn was right about one thing: Sexting someone is a pretty good way to show them that you’ve got the tools.

let me send u a pic of my polling place #clyburnsexts

who wants the (D)? #clyburnsexts

“They used to call me ‘The Whip'” #clyburnsexts