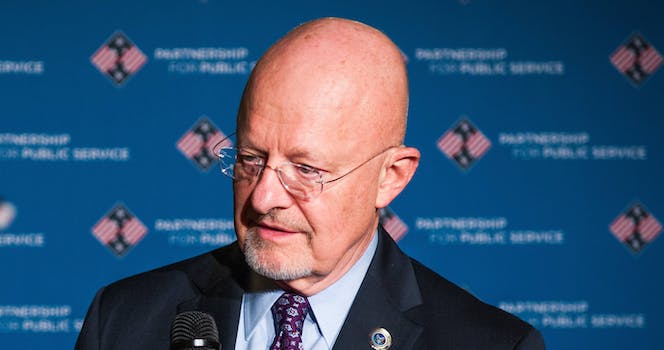 A name, but no evidence.

The head of the U.S. intelligence community says he knows which North Korean leader directed the cyberattack on Sony Pictures Entertainment that crippled the company’s systems, exposed private documents, and sparked a firestorm over the comedy film The Interview.

James Clapper, the Director of National Intelligence, told an audience at Fordham University’s International Conference on Cyber Security on Wednesday morning that the North Korean official responsible was Gen. Kim Young Chol, the head of the country’s intelligence agency, the Reconnaissance General Bureau.

As the leader of North Korea’s spy corps, Gen. Kim is Director Clapper’s direct counterpart in the brutally repressive hermit kingdom. Clapper said that he met Kim at what the Daily Beast described as “a tense 12-course meal in Pyongyang last year.”

“The RGB,” Clapper said during his keynote address, “is the organization responsible with the overseeing attack against Sony.”

While the FBI alleges that North Korea hacked Sony, it has yet to offer any evidence to back up this claim. Outside security experts are dubious. The Intercept reports that the bureau may unveil some evidence soon.

It’s worth noting that Director Clapper doesn’t have the best track record for honesty. In March 2013, in response to a question from Sen. Ron Wyden (D-Ore.), Clapper lied under oath to the Senate Intelligence Committee about the extent and focus of U.S. surveillance programs. President Obama resisted calls from many lawmakers to fire Clapper, including those from Rep. Darrell Issa (R-Calif.), then the chairman of the House Oversight and Government Reform Committee.

Clapper never admitted that he had lied to Congress, instead apologizing for what he called an “erroneous” response.