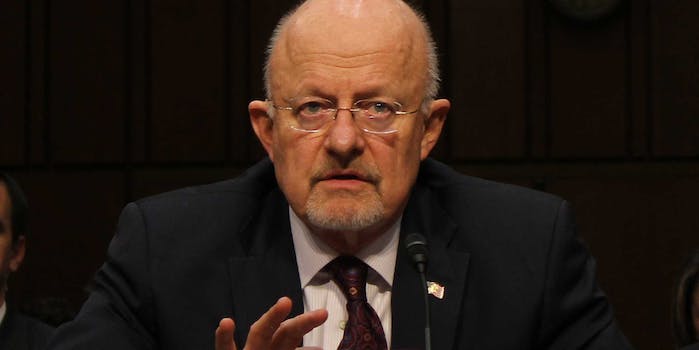 Head of U.S. Intelligence admits he lied, has your data after all

James Clapper has a hell of a lame excuse for telling Congress that the NSA doesn't keep tabs on millions of Americans.

The Director of National Intelligence has a hell of a lame excuse for telling Congress that the NSA doesn’t keep tabs on millions of Americans while secretly collecting their phone records.

“I apologize,” James Clapper wrote in a letter to Diane Feinstein (D-Calif.), head of the Senate Intelligence Committee. “I simply didn’t think of Section 215 of the Patriot Act.”

The letter, dated June 27 and made public Tuesday, is a reference to Clapper’s staunch denial during a March 12 hearing. Senator Ron Wyden (D-Ore.), who has a long history of pushing for more transparency from the NSA, had asked the director a pointed question:

“So what I wanted to see is if you could give me a yes or no answer to the question, does the NSA collect any type of data at all on millions or hundreds of millions of Americans?”

Clapper’s excuse hinged on the fact that Wyden also referenced a quote from Keith Alexander, who heads the NSA and had claimed that “the story that we have millions or hundreds of millions of dossiers on people is completely false.” So, Clapper claims, he thought he was being technically accurate when he said the NSA doesn’t have entire dossiers on so many Americans.

What the NSA does have, as documents leaked June 5 show, is the metadata of every Verizon phone call in which at least one person was in the U.S. That means who called whom, how long the call lasted, and when texts were sent. And it’s not just Verizon; other major carriers such as AT&T and Sprint haven’t denied such a program and are thought to also participate.

Clapper said he got tripped up because he thought Wyden was talking about of Section 702 Foreign Intelligence Surveillance Act (FISA). FISA’s 702, according to comments by the deputy director of the FBI, is intricately tied to the NSA’s PRISM program, which allows the agency to tap American companies like Gmail and Facebook for information. FISA requires the agency to discard information on Americans it acquires inadvertently, though many fear the agency keeps more than it’s indicating.

“That is why I added a comment about ‘inadvertent’ collection of U.S. person information, because that is what happens under Section 702 even though it is targeted at foreigners,” Clapper continued. “That said, I realized later that Senator Wyden was talking about Section 215 metadata collection, rather than content collection. Thus, my response was clearly erroneous.”

He would have spoken up earlier, Clapper said, but the metadata collection program was classified. He also stressed his nearly 50 years working U.S. intelligence, and said “mistakes will happen, and when I make one, I correct it.”

As Guardian reporter Glenn Greenwald, who broke the Verizon metadata story, tweeted, “lying to Congress is a felony, but whatever.”