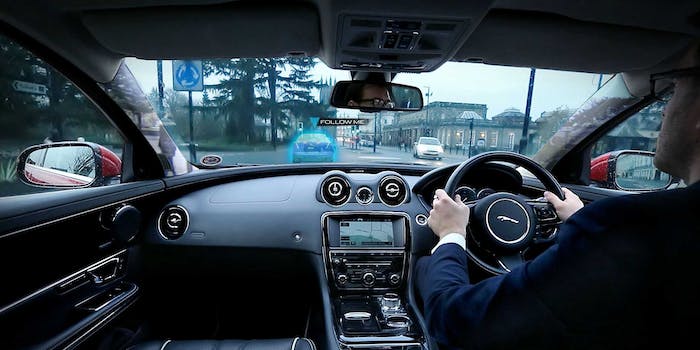 Wait until you see the video.

Jaguar Land Rover would like to do away with blind spots. After showing off what it calls “Invisible Car Technology” with its transparent bonnet earlier this year, the latest project aims to make the roof support pillars disappear when the driver needs a wider view.

The 360 Virtual Urban Windshield doesn’t actually vanish the pillars—there are no known magicians on staff at Jaguar Land Rover. Instead, the inside edges have video screens that display a live look at what’s happening outside the vehicle, showing what would otherwise be obstructed from view.

The transparent pillar technology extends to the side support beams as well, giving a fuller picture of what’s happening alongside the vehicle when the drive turns his or her head in that direction. When looking straight ahead, the pillars would look no different than they do in most of today’s cars.

In addition to the full range of vision provided by the 360 Virtual Urban Windshield concept, Jaguar Land Rover also revealed a project to improve navigation that is either awesome or terrifying depending on your opinion of ghosts.

“Follow-Me Ghost Car Navigation” projects a virtual car on the road in front of the driver, serving as a guide that gives a better visual indication as to where to turn instead of listening for the GPS to tell you to get into a far lane at the very last possible second.

Not directly brought to attention but also shown off in the video are other navigation enhancements. At various points a variety of projections can be spotted on the windshield, including landmark markers, a countdown until a traffic light turns green, and information at a parking garage that displays the cost and number of spaces available.