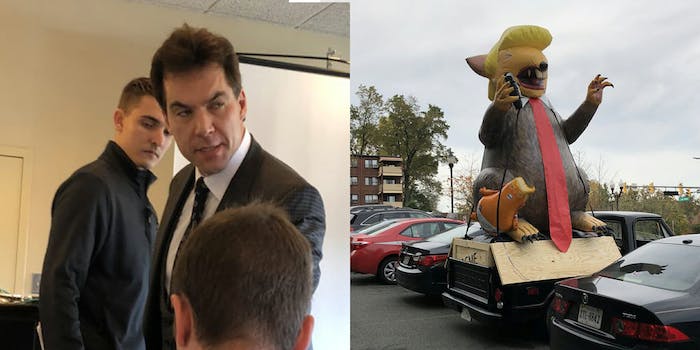 Jacob Wohl’s introduction to Washington politics and reporting in the real world—as opposed to the Twitter universe—went sideways on Thursday during a press conference that Wohl attended with conspiracy theorist and lobbyist Jack Burkman.

The pair held their show in a Holiday Inn just across the Potomac River from Washington, D.C. The premise of this press conference was to “present a credible witness” who would accuse Robert Mueller of sexual assault. But any credibility Burkman and Wohl had hoped for was gone before they ever walked into the Rosslyn-area hotel in Arlington, Virginia.

They were scooped on their own story by the Atlantic when the outlet reported that Burkman was behind a scheme to pay women to falsify allegations against Mueller. We even knew the dollar amount that Burkman was offering— $20,000.

Wohl was implicated when it was revealed that he was behind the company, Surefire Intelligence, that had published the official-looking documents outlining the allegations. Surefire’s LinkedIn pages also featured photos of stock models. The profile for an employee in Tel Aviv used a photo of actor Christoph Waltz. The phone numbers listed on Surefire’s website were registered to Wohl’s mother’s name.

The Daily Dot went to the physical address listed for Surefire’s Washington office on Wednesday and, unsurprisingly, discovered that no such office exists. According to Surefire’s website, its D.C. office should be at 1050 Connecticut Avenue in suite No. 510. That address exists and I walked around the fifth floor for about 30 minutes searching for the suite but there was nothing. I also asked a handful of receptionists about the address, they knew nothing about any company called Surefire Intelligence and they told me that suite No. 510 doesn’t exist.

Burkman has a history of being sloppy—his last press conference we attended was ridiculed by his fellow conspiracy theorists—and Wohl proved to be no more cunning. As the press conference got underway there was a bank of cameras present; Wohl had been complaining the mainstream press wasn’t giving him the necessary attention but it seemed well accounted for on Thursday.

Before the show began, Claude Taylor—a left-leaning activist—popped up in a green Hawaiian shirt and announced that he’d brought a giant inflatable rat dressed as President Donald Trump. The rat was in the bed of a pickup truck in the parking lot.

Wohl began by yelling at the press and complaining about the coverage. The tense back-and-forth was the only constant of the press conference as his story was picked apart by reporters.

He claimed that a woman, Carolyne Cass, has come forward to Surefire Intelligence and told the agency that she was assaulted in a New York hotel. When a reporter pointed out that the Washington Post spotted Mueller at jury duty on the date in question, Wohl suggested that the story had been planted eight years ago. He also said that “sometimes people go to jury duty but they’re also somewhere else,” a remark which spurred laughter from the room. There was also an embarrassing moment when a reporter noted that Cass’ name was spelled differently throughout the charging document labeled “confidential raw intelligence.” Her signature was a DocuSign, making it even more dubious and when asked about the correct spelling, Wohl told us “you’ll figure it out.”

Burkman called on the reporter from conservative blog Gateway Pundit, but she did little to tame the reporters’ questions, expressing skepticism about the idea that Cass just randomly came forward with this story. When the Daily Dot asked Wohl when he incorporated Surefire Intelligence as an LLC, he couldn’t give us an exact date. He claimed that the LinkedIn profiles were fakes but that the website—the one listing the nonexistent Washington address—was real and associated with him.

There were also lighthearted moments. When Burkman told the press that Wohl is a “child prodigy that has eclipsed Mozart,” the entire room burst into laughter.

Finally, Burkman held up his hands and ended the conference to shouted questions. The pair disappeared out a back door while the reporters gathered outside to look at the inflatable rat and wait for Ubers.

We didn’t learn much from this event, perhaps the only thing we actually realized was unsurprising—when these internet personalities emerge from behind their computers, they can seem shockingly unprepared for scrutiny. Wohl and Burkman expected us to believe their story with no corroborating evidence, not even a real signature on their charging document. There was no CCTV footage or other witnesses to justify Cass’ story. It wouldn’t be out of the realm of possibility to assume that Cass doesn’t exist.

It’s unclear what the next step in this show is, Burkman has said that he plans to file a report with the New York Police Department. As for Wohl, he seems to have learned that pushing stunts in the real world is much more difficult than on Twitter.