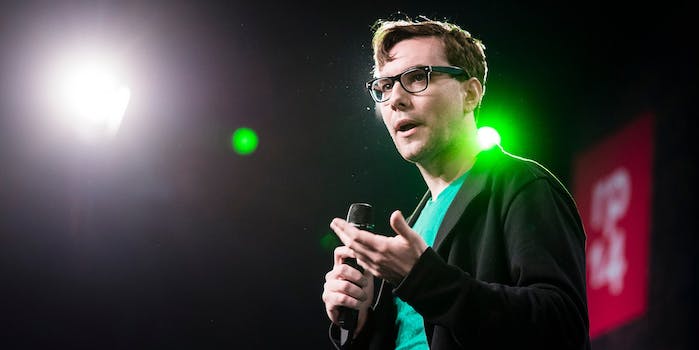 'What is important now is, if you are a victim, do not be afraid.'

In the wake of programmer Jacob Appelbaum’s abrupt departure from the Tor Project, rumors and accusations about both sexual misconduct and bullying have surfaced that extend back years.

Appelbaum was suspended without pay for two weeks from the Tor Project in March 2015 as a result of an internal complaint filed against him due to harassing behavior toward other employees, according to sources within the Tor Project.

Now, four witnesses—including a current senior Tor employee—are stepping forward into the public eye, adding valuable insight into how Appelbaum allegedly intimidated those around him to keep accusations of sexual misconduct secret and pressure those who are speaking out to remain anonymous.

“I observed Jake grabbing her arm, very forcible attempts to kiss her—there is royally, very obviously a very negative reaction to that, she actually squirmed to get away.”

Appelbaum, who has worked closely with the likes of WikiLeaks founder Julian Assange and former NSA contractor Edward Snowden, became a prominent face of Tor in the last decade as he worked as a public advocate and occasional hacker for the Tor Project. Tor is a powerful U.S. government-funded anonymity software that protects the identity and location of its users. It’s used by a wide range of people including human rights activists, government employees, criminals, journalists, and dissidents in countries that impose online censorship and crack down on internet activity.

Glowing profiles by publications like Rolling Stone and Vice cemented his position as a 21st century political geek rock star. The cultural heights to which he rose make his fall all the more jarring for the community—and exacerbate the pressure to remain silent on those who claim to be his victims.

Late last week, a website was launched in which anonymous victims of Appelbaum’s alleged sexual misconduct joined together to post their stories in an effort to publicize them without a much-feared wave of personalized and professional backlash.

The stories are graphic and describe the ways Appelbaum allegedly assaulted people in public and in private. “Forest” writes that she woke up one night while platonically sharing a bed with Appelbaum to find her pants unzipped, his hands in her underwear and touching her vagina. “Sam” recounts an incident when Appelbaum allegedly pulled them into a bathtub with him after they repeatedly told him not to. “River” claims Appelbaum raped her in a room in front a group of his friends.

Three current Tor employees—two of whom agreed to be named on the record—have confirmed that they personally know the authors of the alleged victim statements on the site, JacobAppelbaum.net. Although they continue to maintain anonymity for the authors of the stories, these Tor employees are now publicly vouching for the site’s authenticity, which Appelbaum has called into question.

Andrea Shepard, a senior Tor developer, confirmed to the Daily Dot that she was in touch with at least one of the victims on the website several months ago. Alison Macrina, a Tor employee and advocate as well as the founder and director of the Library Freedom Project, also vouched for the authenticity of the anonymous victims’ statements.

“It’s related to something that started happening in earnest about three or four months ago,” Macrina said. “Which is simply that people stopped being afraid to talk to each other about Jake. That’s how I heard from some victims.”

Macrina, who also works for the Tor Project and travels the country educating librarians about privacy issues, said the site was established so that people would have a “safe way” to share their stories. “Those of us who can afford the exposure of backing them up publicly know their real identities and can vouch for them,” she said.

Appelbaum broke his silence on Monday, deriding the accounts of his former colleagues as “vague rumors.” It was an “attack,” he said, on his reputation, led by character-assassins spreading “vicious and spurious” allegations against him.

“I want to be clear,” Appelbaum wrote, “the accusations of criminal sexual misconduct against me are entirely false.”

Appelbaum’s representative, Claudia Tomassini, originally said his legal team was “working on an injunction against these monstrous and factually incorrect accusations.” A few hours later, she walked back that statement. The legal team is now “weighing all options,” Tomassini told the Daily Dot, “including such legal actions as may be appropriate.”

Four prominent members of the technology and security community talked to the Daily Dot about one incident that they say took place late last year.

“It was in December of last year,” technologist and developer Meredith L. Patterson said. “It was the day we arrived at CCC.”

CCC, or Chaos Communication Congress, is an annual conference where many of the world’s top technical minds gather to discuss internet privacy, freedom, and security. As the public face of Tor, Appelbaum has been a fixture of the conference for many years.

Patterson was sitting in the lobby of the Radisson Blu, which stood next door to the conference hall, with fellow developer TQ Hirsch, Shepard, and security specialist Emerson Tan. All four confirmed the following events to the Daily Dot.

“Jake came into the lobby with two or three other men and a young woman who was obviously a little bit inebriated,” Tan told the Daily Dot. “She didn’t look entirely happy and over the course of the next five minutes, I observed Jake grabbing her arm, very forcible attempts to kiss her—there is royally, very obviously a very negative reaction to that, she actually squirmed to get away.”

“Most of Jake’s attention was focused on some girl who was somewhat shorter than he was,” Hirsch said. “She was cornered against the bar, looking around I presumed to try to find an escape route or for someone she could get the attention of.”

No one from this group of four knew who this woman was, but they all claim the woman was rejecting Appelbaum’s alleged advances. Even while she was trying to avoid Appelbaum, they said, the woman was looking for her bag somewhere in the lobby. Unwilling to leave without it and all the possessions inside, the woman was stuck searching while Appelbaum allegedly continued to touch her.

“Jake is obviously ratcheting up the pressure,” Tan said of the scene. “He reaches around her backside, makes a groping move around her breast. At this point it’s obvious this is not good.”

“Emerson is like, ‘Is he actually doing that? What the hell?’” Patterson recalled. “He gets up and walks across the bar. I stayed seated as did the other people I was with. I saw him physically interpose himself between Jake and this girl.”

Tan recalled exactly what he did after putting himself between Appelbaum and the woman.

“I went up there and shook his hand, congratulated very fully on what a brilliant job he was doing on the Tor Project, standing up for the people, and all this stuff that was actually bollocks,” Tan said. “That gave her 30 seconds to a minute and a half to retrieve her bag and then go.”

Tan said afterwards he spoke briefly with the woman. He asked if she wanted to file a police report, but she was unwilling. She left the hotel before any of the witnesses learned who she was. The incident was never reported to police or to the Tor Project.

“I talked to [the people with Appelbaum that night], and they just wrote it off as the great man doing his thing,” Shepard said. “Getting any of them to report anything, even the victim, was just impossibly hard because you don’t do that to heroes.”

Appelbaum’s behavior at CCC caused another prominent member of the security community, technologist Nick Farr, to write a blog post on June 5 accusing Appelbaum of bullying tactics during the conference.

Both Tan and Patterson acknowledged that this sort of problem happens elsewhere, but Tan focused in specifically on the problems within the hacker community. The prevalent anti-authoritarian and anti-law enforcement attitudes make it particularly difficult to go after the alleged predators, he said.

“A lot of these women are absolutely terrified because so much of their identity revolves around what they’re doing and their activism,” Tan argued. “They’re terrified of saying anything and of going to authorities because they face immediate social ostracization for doing so. He’s found a perfect place to hang out because he knows the chances of them lodging a criminal complaint or of him facing prosecution is almost zero. Which is kind of terrible.”

“What is important now is, if you are a victim, do not be afraid. You are not alone. There are people who will support you.”

Macrina also claims that she’s witnessed Appelbaum “use frightening methods to extract information from people when he feels criticized.” “When people started talking about his behavior a few months ago, he began this relentless interrogation to find out who was ‘behind’ it,” Macrina said. “The truth was, many people were talking.” When Appelbaum learned “who he thought his culprits were,” Macrina claims he began to intimidate them into silence.

“He has real knack for convincing people that what he’s done to them is actually fine,” she said.

According to a 2016 study of 200 women in technology, 60 percent have faced unwanted sexual advances, and of those, 65 percent came from a superior. One in three women in the technology industry feel unsafe because of incidents at work. The Geek Feminism wiki keeps a timeline of sexism in the tech industry, and recent past is littered with discouraging stories:  Developer and designer Julie Ann Horvath was vilified by numerous individuals in the industry after speaking up about sexism at GitHub back in 2014. High-profile venture capitalist and former Reddit CEO Ellen Pao, who lost her case claiming gender discrimination against former employers, had her personal details exposed and life severely disrupted by targeted abuse online.

The recent case of Brock Turner, the Stanford student who sexually assaulted an unconscious woman behind a dumpster, is a reminder that even when women speak out publicly, the punishment does not always appear to fit the crime. Turner was given six months in jail, a sentence that’s sparked national outcry.

In a white male-dominated technology industry, stories of sexism, racism, and harassment are commonplace. Although companies and conferences are making efforts to improve representation and fix a culture where harassment is accepted, it remains pervasive.

Tan has a message he wants to send out to any other potential victims: “What is important now is, if you are a victim, do not be afraid. You are not alone. There are people who will support you.”

Update 7:47pm CT, June 9: Jill Bähring has identified herself as the subject of the eyewitness accounts in this story and has refuted their portrayal of events.