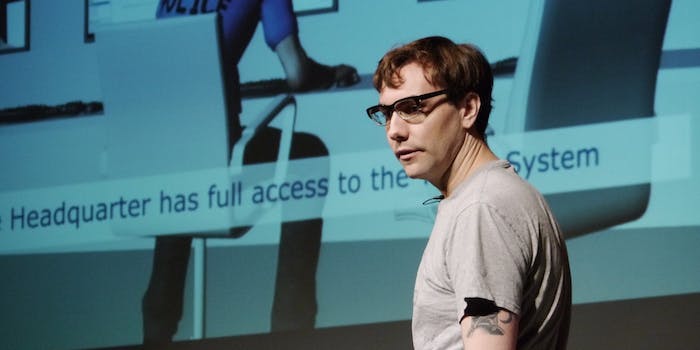 'I recall that night clearly, and my story is entirely different.'

Two weeks after security developer Jacob Appelbaum‘s tumultuous exit from the Tor Project amid allegations of years of sexual misconduct, one of the women characterized as a victim has refuted eyewitness claims that he did anything wrong.

The Daily Dot reported Tuesday the eyewitness accounts of four security specialists who claim they saw Appelbaum grope a distressed woman at the Radisson Blu hotel in Hamburg, Germany, during a hacker conference in December. One witness described her as displaying “obviously a very negative reaction” after Appelbaum allegedly grabbed her arm while trying to kiss her. In separate interviews, the developers conveyed nearly identical memories of the incident.

All four eyewitnesses said they did not know the name of the woman.

Appelbaum, who has not spoken personally to the Daily Dot since the allegations emerged but has continued to communicate through a public relations firm, chose not to provide a comment for Tuesday’s report. On Wednesday, however, a request for a “full correction” of the story was received through a spokesperson, citing a letter attached in an email.

The letter, attributed to Jill Bähring and published online by Appelbaum on Thursday, indicated that it was written by the previously unidentified woman allegedly groped by him in the witnesses’ story. Bähring confirmed that she is the author of the letter in a tweet following its publication.

“I recall that night clearly, and my story is entirely different.”

“I recall that night clearly, and my story is entirely different,” Bähring wrote.

Appelbaum has made an international name for himself working with WikiLeaks as well as former National Security Agency (NSA) contractor and whistleblower Edward Snowden. In the last decade, he’s been a vocal advocate for the Tor Project, the American government-funded nonprofit organization that maintains the online anonymity network Tor.

Bähring says in the letter that she is a close friend and confidant of Appelbaum’s, and that the pair have been romantically involved. Bähring says they shared drinks that night at a restaurant in the Radisson Blu. At approximately 2am, the group—Bähring, Appelbaum, and a friend—decided to turn in for the night. That’s when the disputed incident reportedly occurred.

The letter appears to confirm a number of eyewitness statements. Bähring says she was “emotionally distressed,” and that she would have appeared that way. In response to a statement that Appelbaum “forcibly” attempted to kiss the woman—in addition to grabbing her arm, her backside, and “making a move for her breasts”—the letter says Appelbaum did “have his hands all over me.”

However, the account also strongly refutes details shared by the eyewitnesses: Appelbaum was touching the woman because she was touching him; nothing “inappropriate” was going on, Bähring says in the letter. When she pushed Appelbaum away in the hotel lobby, as the eyewitnesses recounted, she did so “playfully.” But most importantly, the letter speaks to the woman’s frame of mind. All events were consensual, Bähring says.

The account claims that the woman, when approached, told one of the eyewitnesses that Appelbaum was not harassing her. Emerson Tan, a security specialist and the person who was involved in the incident, refutes that account.

“This is a situation open to misinterpretation because I do not know what she’s thinking,” Tan said. “I’m fully willing to stand up and say that.”

According to the letter, Bähring said goodbye to Appelbaum and then walked her friend to another hotel. An eyewitness told Gizmodo he later saw the woman back at the bar inside the Radisson appearing “composed but obviously upset.” Bähring says in the letter that, despite the eyewitnesses’ interpretation, she was not “hiding out” in the bar but rather had returned because she “regretted not having properly said goodbye” to Appelbaum. She reportedly stayed in the bar 10 minutes before leaving.

Bähring’s letter concludes by casting doubt on the “rumors and speculation” concerning Appelbaum’s alleged “misbehavior.” It accuses the four witnesses of “willingly” misinterpreting the woman’s experience at the hotel. Further, it decries “all the stories” published in the last week, which would include those self-reported by former colleagues, whom Appelbaum has been accused of harassing and sexually assaulting. Bähring went on to chide “those who call themselves journalists” for reporting on the stories of those allegedly abused.

Every day this week, a new person has come forward to publicly accuse Appelbaum of violating personal boundaries. Security engineer Leigh Honeywell detailed incidents of sexual misconduct with Appelbaum that made her feel “afraid and violated,” describing one violent, intimate incident as “profoundly upsetting.”

Technologist Nick Farr wrote about aggressive harassment and intimidation by Appelbaum at a hacker conference, including finding a cryptic note left in his hotel room. This behavior caused him to step back from the security and hacker communities and stop attending events.

Alison Macrina, a core developer at the Tor Project and founder of the Library Freedom Project, told the Daily Dot that she could vouch for the identities of Appelbaum’s former friends and colleagues who have anonymously posted accounts of harassment and sexual misconduct and assault online.

The Daily Dot reported on Tuesday that Appelbaum had been suspended in March 2015 after internal complaints were filed against him alleging sexual harassment toward other employees. One of those employees was identified by BuzzFeed on Thursday as Karen Reilly, former development director at the Tor Project. Two other developers working for the Tor Project also spoke to the veracity of the anonymous claims. One is Andrea Shepard, a senior staff member, while the other remains anonymous, like many of the alleged victims, citing a fear of retaliation.

The Freedom of the Press Foundation, for which Appelbuam served as a volunteer member of its technical advisory board, announced his departure from the organization on Wednesday as a result of the allegations.

“These are interconnected communities, and everyone is doing their best to declare and remove themselves from conflicts of interest,” Oscar award-winning filmmaker Laura Poitras told the Daily Dot.

Appelbaum has a starring role in Poitras’s latest film, Risk, a documentary about WikiLeaks publisher Julian Assange, as does WikiLeaks editor Sarah Harrison. The film, which debuted last month to glowing reviews at the Cannes Film Festival, was produced in association with First Look Media, the news company founded by Pierre Omidyar in the fall of 2013.

“I witnessed this with how the Freedom of the Press Foundation handled our decision, and we are doing the same with the film,” Poitras added.

Claudia Tomassini, the head of an international film publicity agency, delivered Bähring’s statement to the Daily Dot. Her agency is representing Risk, and while Tomassini requested the changes—“We request a full correction based on the statement you will find attached,” she wrote in an email—she told the Daily Dot on Thursday that Appelbaum is not her client.

Tomassini said she’s known Appelbaum through his work for many years, and that he “deserves as fair a hearing as anybody who comes forward with grievances against him.”

Bähring did not respond to our multiple requests for comment, including an email to Appelbaum’s spokesperson and an email to Bähring herself.

Correction: According to WikiLeaks, Risk is not an “authorized” documentary about Assange. We regret the error.