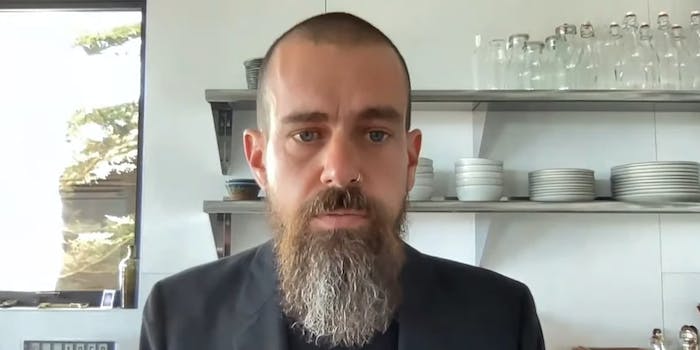 Is Jack Dorsey checking Twitter during the big tech hearing?

His account has liked several tweets while he's been testifying.

The House Energy and Commerce Committee has spent several hours grilling big tech CEOs Mark Zuckerberg, Sundar Pichai, and Jack Dorsey during a hearing about disinformation and social media’s role with promoting it.

We all know congressional hearings can be a little boring, especially with the big tech CEOs all being asked similar questions—today’s favorite questions seem to be “yes or no” ones—that we’ve seen them asked numerous times while testifying before Congress.

It’s a mix of (sometimes) interesting questions and a whole bunch of grandstanding. So it’s natural for your mind to wander a bit during the monotony of the hearing.

But several people online noticed that the Twitter CEO had liked several tweets during the time he was testifying before Congress.

Alex Heath, a reporter at the Information, was among a few people online to have first to have spotted Dorsey’s like-spree.

Since the hearing began, Dorsey has liked several tweets, including two tweets that were pictures of him testifying before the House committee.

Other likes include one of Cash App, which Dorsey is the CEO of, and of people pointing out that he had a clock behind him during the hearing—which, according to Gizmodo, displays the price of cryptocurrencies.

He also liked a tweet where someone admired an “all-time great intersection” in San Francisco.

The Twitter CEO also seemed to poke fun at the hearing by tweeting—in the middle of it—a poll for people to vote for “yes” or “no,” clearly referencing how many lawmakers asked the tech CEOs to answer yes or no questions.

It’s possible that someone is just helping Dorsey with his account while he spends his time testifying, but it’s just as likely he’s just as bored as the rest of us.

Update 4:10pm CT: During the hearing, Rep. Kathleen Rice (D-N.Y.) asked Dorsey about the “yes” or “no” poll posted on Twitter during the CEO’s testimony. Rice asked which option was winning, and Dorsey told her that “yes” was ahead in the poll.

Rice responded: “Your multi-tasking skills are quite impressive.”