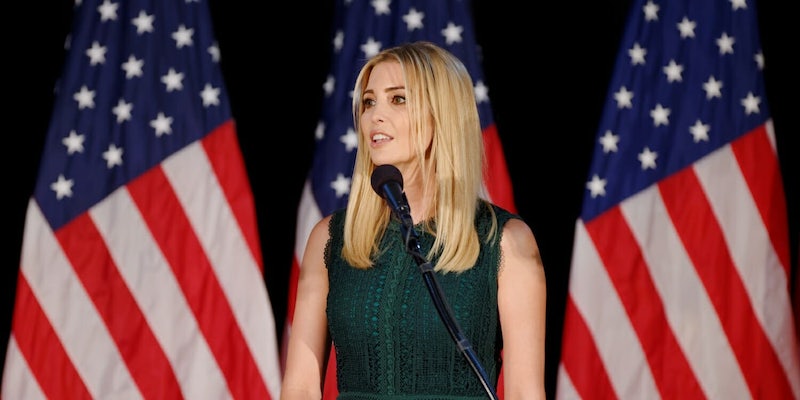 The tweet appeared to be a shot at her father's critics.

“Those who say it can not be done, should not interrupt those doing it,” she wrote, in an apparent shot at the president’s critics.

“Those who say it can not be done, should not interrupt those doing it.” -Chinese Proverb

Rather than impressed by the tweet, however, users on China’s social media sites were puzzled at whether this was a Chinese saying at all.

Immediately, thousands of users began to offer their suggestions as to what proverb the tweet might have been an attempt at quoting, but no one could verify its authenticity.

“She saw it in a fortune cookie at Panda Express,” one user joked.

The country’s other state-run media outlets began to join in the fun, including the China Daily newspaper and the Global Times.

Soon after the Chinese were on the case, American social media users had grabbed hold of this new meme with delight.

"This not even remotely an actual Chinese proverb." – Chinese Proverb https://t.co/d7UiTYvrfS

"You can call any old shit a Chinese proverb on the internet."
–Confucius https://t.co/lCcBwtKm5g

Eventually, the Global Times actually sourced the quote to a 1903 news article, declaring that “the phrase quoted by Ivanka has actually no relation to China.”

According to Global Times, the saying appears specifically in an edition of The Public magazine from March 7, 1903. It exists in several forms and seems to have evolved as a popular reflection at a time of industrial innovation and change. One week later, it appears in the Indiana-based Evansville Courier and a month later in Kindergarten Magazine.

In 2013, Ivanka Trump made a similar mistake, tweeting: “Choose a job you love, and you will never have to work a day in your life.” She then falsely attributed that saying to the Chinese philosopher Confucius.

It’s just like President Abraham Lincoln said, “Don’t believe everything you read on the Internet.”