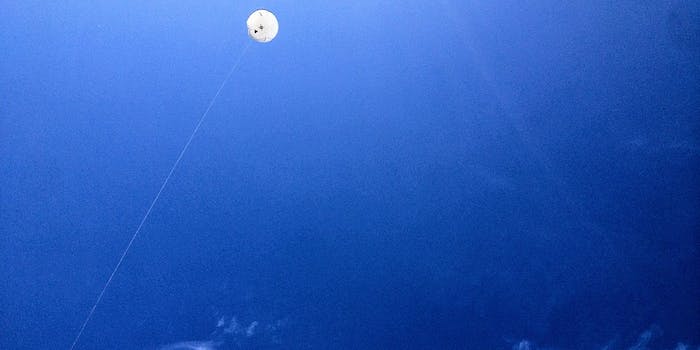 Israel is protecting itself with spy balloons

And no, shooting them down doesn't work.

F16s and drones routinely fly surveillance missions over the West Bank and Gaza, but the latest addition to Israel’s intelligence arsenal is probably not what you’d expect: intelligence-gathering balloons.

Where exchanges of sling-shot rocks and Molotov cocktails for tear gas and rubber bullets erupt onto the the city’s streets, the Israeli military’s “eyes in the skies”—and the ground teams that operate them—are poised to monitor and advise security personnel on the ground on unrest in real time.

Israel’s unlikely advancement in surveillance technology is basically a blimp, filled with non-flammable helium and mounted with high-definition cameras and meteorological sensors. According the developers of the SkyStar 180 balloons deployed over Jerusalem, the Israel-based defence company RT, the intel balloons can hover in the air for up to 72 hours before requiring a 20-minute, re-inflation break.

Creators of Skystar 180 boast its capabilities include: “360-degree, 24-7, presence above a protected area, providing high quality surveillance and automatic scanning. It performs in all weather conditions; has high mobility and a very small logistical footprint; is simple to operate and is highly cost effective.”

The Israeli Defense Forces said earlier this month that their intelligence-gathering balloons proved invaluable in its recent war this summer with Palestinian factions in Gaza, posting video footage of a targeted strike in Gaza captured by a surveillance balloon to its website. Thirteen balloons were deployed during Operation Protective Edge, and despite regular rockfire from inside Gaza, none were lost.

According to, Lt. Orel, the Israeli Balloon Company Commander during operations in Gaza, “We have the ability to look into the furthest and smallest structures in Gaza. We can detect terrorists and the weapons they’re carrying. The enemy has no idea how much we can see.”

The Times of Israel reports that, while some residents of Jerusalem applaud the additional measures taken to secure the city, others have expressed concerns over the potential privacy implications the balloons pose.

The balloons are not just limited to Israel. RT’s surveillance balloons are reportedly currently deployed over Afghanistan, Mexico, Russia, Canada, and somewhere in “Africa.” The balloon producers told local press, “our systems [are] being used around the world, but as an Israeli company we are especially proud to be helping the security situation in Jerusalem.”

Those new to balloon technology might wonder whether these balloons aren’t prone to being brought down by a single projectile. But the U.S. military said of their balloons deployed in Iraq and Afghanistan last year, “We actually like people to shoot at it. When they shoot at it, that tells us where they are. Once we got ‘em, we got ‘em.”