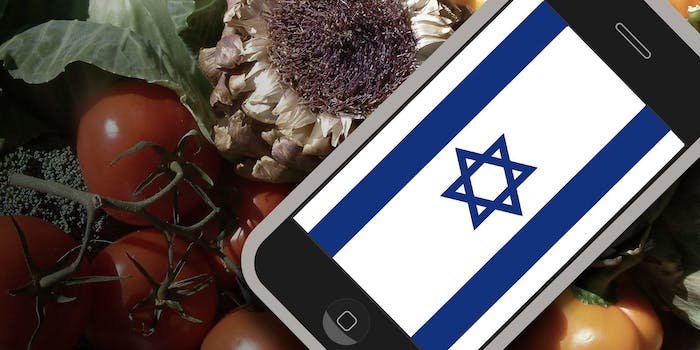 This app scans your groceries to help you boycott Israel

Mobile apps: The final frontier in the Israeli-Palestinian conflict.

A new frontier is opening in the Israel-Palestine debate, with the rapid popularization of an app that is enabling the politically conscientious to boycott Israeli products and produce, Forbes reports.

Buycott is a barcode-scanning app that allows its users to build campaigns and lists of products, companies, and causes to be avoided. One user might use it to check that none of their groceries are sold by Nestlé, while another might look up the provenance of their produce to ensure none of it is genetically modified. These “campaigns” are built and maintained by the users, and others can subscribe to the campaigns they feel affinity to if they don’t want to create their own.

But a look at the top campaigns on Buycott’s website shows that the fastest growing campaigns are more geopolitical in nature—and calling for a boycott of Israel.

One campaign, “Avoid Israel Settlement Products,” claims that “Israeli settlements are growing in the West Bank and increasingly destroying any possibility of a two state solution”—and has grown exponentially in recent weeks. On July 7, 2014, it had 2,773 members and was just over a year old; the next day, Israel began Operation Protective Edge, and by the end of the month it had rocketed to 75,242 members. The campaign now has 146,894 members.

Another campaign, “Long Live Palestine Boycott Israel,” was started “in April by a British teenager, but floundered with a few hundred members through mid-July,” reports Forbes. After a month of bitter fighting in the Gaza strip, it now stands at 270,372—just behind the most popular campaign of all time, “Demand GMO Labeling” (which has 296,601).

It calls on its members to boycott companies, including AOL (“over the last 10 years AOL has invested well over half a billion dollars in Israel”), Danone, Garnier (“recently sent care packages to the IDF”), and IBM. It also encourages members to support cosmetics company LUSH (“endorsed single aimed at raising awareness of the struggle for human rights in Palestine”), amongst others.

Buycott was originally founded by Ivan Pardo in 2013. It initially was used primarily to “avoid putting coins in the coffers of the conservative billionaire Koch brothers,” says Forbes. Since then, its uses diversified, before finding unique success as a result of the ongoing fighting in the Middle East.

“I noticed 3 weeks ago that we were seeing an unusual spike in traffic, but there hadn’t been any articles written about the app or Israel campaigns,” Pardo told Forbes. “Next thing I knew Buycott was a top 10 app in the U.K. and Netherlands, and #1 in a number of Middle Eastern countries.”

Mobile technology has played a unique and unprecedented role in the Gaza conflict over the last month, including the repurposing of “zero content messaging app” Yo to warn of missile attacks, as well as the IDF’s use of dating app Tinder to spread pro-Israeli propaganda. There has also been some deeply unpleasant uses—such as the (since-removed) Google Play Store game that let android gamers bomb Gaza.