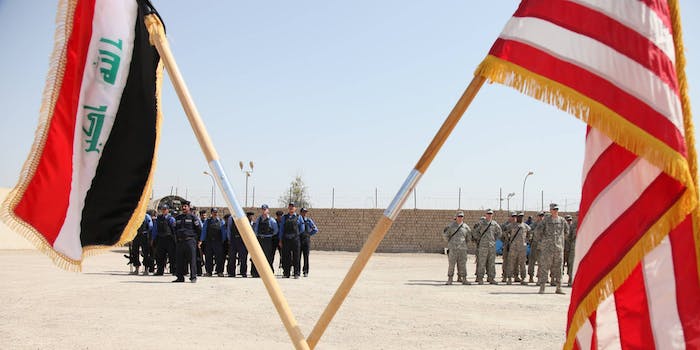 Not even the NSA can trump this simple strategy.

As the Syrian civil war spills over the country’s eastern border, the nation of Iraq is tearing at the seams.

Violence is spreading and the U.S. intelligence community is accused of being blindsided by the rapid advance of Sunni jihadists, led by the Islamic State of Iraq and Syria (ISIS), who now control large swaths of northern Iraq and Syria.

How did American spies not foresee the rapid surrender of thousands of Iraqi troops and several of the country’s biggest cities?

Since the 2011 military withdrawal, American intelligence agencies in Iraq have been forced to rely on satellite imagery and communications intercepts, Foreign Policy reports, a tactic that has failed miserably because ISIS communicates using human beings—not the Internet or phones, networks the U.S. intelligence apparatus can surveil with relative ease. Human couriers, in contrast, move quietly, quickly, and blend into the local population, rendering them effectively invisible.

When the United States military was still in Iraq, the National Security Agency actively monitored every phone call, email, and text message in the country, in a vast surveillance dragnet that effectively countered insurgent efforts to organize resistance against American occupation. The withdrawal has meant the loss of that capability, as well as the loss of human spies that are the United States’ chief weapon against courier networks.

In response to ISIS occupying northern Iraq and posturing towards the rest of the country, the country’s predominantly Shiite south have been called to arms by their most senior religious leader, Grand Ayatollah Ali Sistani, to defend themselves and their country from the conquering army on their doorstep. In the country’s northern extremes, the Kurdish ethnic group is laying the foundations for their own independent state.

At a noon briefing Friday, President Obama vowed to not send American troops back into Iraq, but said his advisors are preparing a range of other options that might provide security assistance to Iraq’s government. Obama said to expect further details next week.

In the absence of soldiers on the ground, who were formerly responsible for American intelligence in Iraq, high resolution satellite images are being taken of the areas ISIS occupies. Additionally, drones are a potentially crucial weapon in the U.S. arsenal, not only as far as missile strikes in Iraq goes but also in terms of the surveillance power.

The U.S. has spent tens of billions of dollars to build tools with which it can spy on digital communications, but the rapidly expanding conflict in Iraq highlights the very real limits of power faced by organizations like the NSA.

“We have enormous interests there,” Obama said of Iraq, “and American troops and taxpayers made enormous investments and sacrifices there. But ultimately, it’s up to the Iraqis as a sovereign nation to solve their problems.”