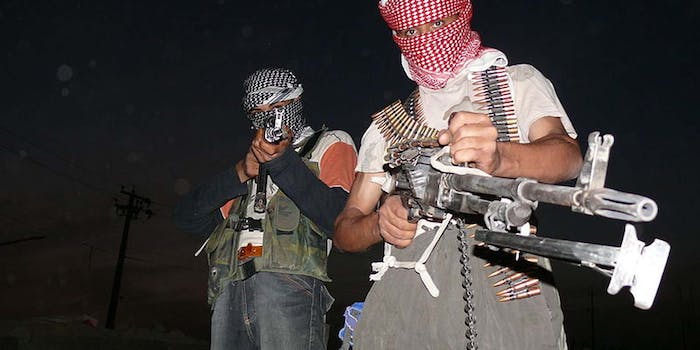 Remember: The goal of terrorists is to make people scared.

On Saturday, a video showing a member of the militant group ISIS beheading British aid worker David Haines appeared online. This is at least the third such video of the group murdering an American or British citizen in recent weeks—James Foley and Steven Sotloff were prior victims. Judging by the video showing another hostage, fellow aid worker Alan Henning, this is a tragic trend that’s unlikely to stop any time soon.

The goal of the videos is obvious: to provoke a reaction from American and British citizens and, by extension, their governments.

Thus far, the tactic seems to be working. A recent Wall Street Journal/NBC poll found that 94 percent of Americans had heard of the killings, the highest level of pubic awareness the poll has found of any event since 2009. The same poll found that nearly two-thirds of Americans now support taking military action against the group, with half of that number in support of putting troops on the ground.

That widespread knowledge of the killing, along with the current framing of the West’s relationship with ISIS, was primarily disseminated through the media. While media outlets have little control over whether or not ISIS releases the videos, they do have the ability to either ignore ISIS’s actions altogether or, at the very least, refrain from linking to/embedding the videos or using images taken from them.

Efforts by critics who charge that covering every brutal thing ISIS does is giving the group exactly what it wants have coalesced around the Twitter hashtag #ISISMediaBlackout.

I think it’s crucial in battle against #isis to NOT show their acts on tv! Please. #ISISmediaBlackout @repubblicait @HuffPostItalia @SkyTG24

The news editors at @Reuters, @CNN and many other orgs owe us an explanation for why they are using ISIS video images #isismediablackout

Our voyeurism is feeding the beast. Let us challenge ourselves. #ISISmediaBlackout

Our world’s media must stop sharing ANY visual of these horrific murders. You simply help ISIS spread their propaganda. #ISISmediaBlackout

If you want to look at David Haines look at him smiling with his lovely wife https://t.co/YIZxQHBPYs #ISISmediaBlackout

I’m deeply uncomfortably with how much air @CNN is giving the Steven Sotloff video. You’re playing into their hands #ISISMediaBlackout

In an age when organized, professional media outlets aren’t necessary to disseminate information, urging news sites to avoid posting pictures and video from the killings likely won’t be sufficient to avoid giving ISIS the satisfaction of having its message broadcast around the world. #ISISMediaBlackout is also aimed at urging every social media user, each one a digital publisher themselves, to show a similar degree of restraint.

As ISIS pursues a sophisticated and deliberate social media strategy in its propaganda war against the United States and its allies in the Middle East, how much attention we pay to the products of that strategy is a question that not only needs to be answered by every media publication covering the unfolding events, but for every denizen of the Internet who is paying attention.