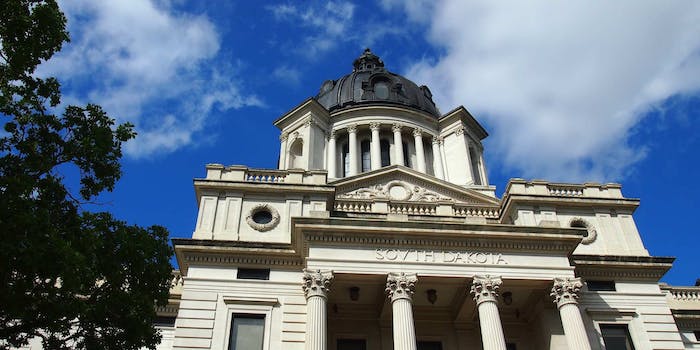 Isaac Latterell thinks unborn fetuses are being beheaded in his backyard.

Godwin’s Law—which states that a Hitler or Nazi comparison is more likely to be invoked the longer an Internet discussion endures—has been corroborated time and again since it was first articulated 15 years ago.

With new enemies comes new rhetoric, however. Thus, I hereby propose Klee’s Rule: Anyone looking to vilify a political opponent in this day and age will inevitably compare them to the violent jihadist group ISIS, a.k.a. the Islamic State.

South Dakota state Rep. Isaac Latterell (R) did just that this week in a blog post titled “Planned Parenthood worse than ISIS and lying about it.” Latterell hoped to make the case for House Bill 1230, the Preborn Infant Beheading Ban of 2015. (Yes, that’s really what it’s called, and yes, it passed South Dakota’s House Health and Human Services Committee in a 11-2 vote.) In medical terms—which, judging by his bill’s title, Latterell is incapable of using—the state legislator wants end to abortions beyond seven weeks.

Here’s the crux of this eminently rational argument:

Most states including South Dakota allow for the death penalty for murderers. There are certain revolting methods of execution, such as beheading, that no state would ever permit, even against murderers who use this method on their victims.  It is this revulsion that leads us to rightly condemn the beheadings committed by unconscionably violent soldiers in the Middle East. … Planned Parenthood abortionists in Sioux Falls are similarly beheading unborn children during dismemberment abortions. This method has been described by the Supreme Court in Gonzales v. Carhart as a procedure that is: “laden with the power to devalue human life,” and is as brutal, if not more so, than Intact Dilation and Extraction (D&X or partial birth) abortions. … No state, no religion, and no organization should ever be allowed to use this unspeakably horrifying method. While we rightly take the speck out of our neighbor’s eye by holding ISIS accountable, let us be sure to take the plank out of our own eye by holding Planned Parenthood accountable.

All this incendiary, fundamentalist grandstanding is very impressive, Rep. Latterell, but you’re looking to outlaw a procedure that isn’t even performed in your state. Per RH Reality Check: “Planned Parenthood Sioux Falls, the only clinic that provides abortions in South Dakota, provides medication abortions up to nine weeks and surgical abortions up to 13 weeks. However, the clinic does not provide surgical abortions in which a D and E is required.’”

Latterell, of course, assumes that it’s all a coverup and that South Dakota doctors are gleefully pulling fetuses limb from limb (after forcing them to appear in ransom videos?). This issue is a bit of a hobbyhorse for him; he proposed nearly identical legislation last year, but that bill predictably fizzled, because it, too, bore no meaningful relationship to reality.

It’s a bit like trying to ban the mistreatment of unicorns. Why not just go full patriarchy and ban all reproductive rights statewide, Roe v. Wade be damned? South Dakota already has just a single abortion clinic servicing a population of 853,000 spread over 77,000 square miles, so it’s not all that far-fetched.

Update Feb. 20, 4:22pm ET: One of Latterell’s fellow Republicans in the South Dakota House of Representatives, Rep. Burt Tulson, on Thursday offered to rewrite HB 1230. It now consists of a single sentence: “The State of South Dakota recognizes the sanctity of human life.”

The amended bill passed the house in a 65-3 vote.