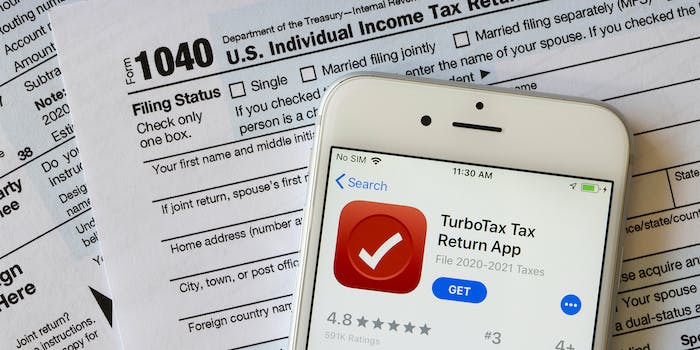 ‘Deceptive’: FTC sues TurboTax for claiming you can file your taxes online for free

It's not as free as they make people believe.

The Federal Trade Commission (FTC) filed an injunction in court last night to demand that Intuit, the parent company of TurboTax, stop falsely advertising that it offers free tax filings.

With Tax Day nearly two weeks away, the FTC doesn’t want the software giant to rope people in with claims of free tax service, when it in fact costs many people money to use the service.

“In truth, TurboTax is only free for some users, based on the tax forms they need. For many others, Intuit tells them, after they have invested time and effort gathering and inputting into TurboTax their sensitive personal and financial information to prepare their tax returns, that they cannot continue for free; they will need to upgrade to a paid TurboTax service,” Reuters reported that suit said.

The FTC called this practice “deceptive.”

In the suit, the FTC noted that if an injunction wasn’t granted, TurboTax would be able to continue advertising its free tax filings, which would lure people in and wind up costing them money. The FTC highlighted a specific ad from TurboTax, which said that “TurboTax Free is free, free, free, free,” and said the fine print revealed it was only free for the simplest of returns.

According to ProPublica reporter Justin Elliott, the suit contains emails from TurboTax employees who worked to block the “free” version of TurboTax in Google search results.

The suit comes after years of reporting by ProPublica, which revealed the tax service’s long fight against free filing.

In a statement to Reuters, Intuit Executive Vice President Kerry McLean said, “While it is disappointing that the FTC chose to file this lawsuit, we look forward to presenting the facts in court and are confident in the merits of our position.”