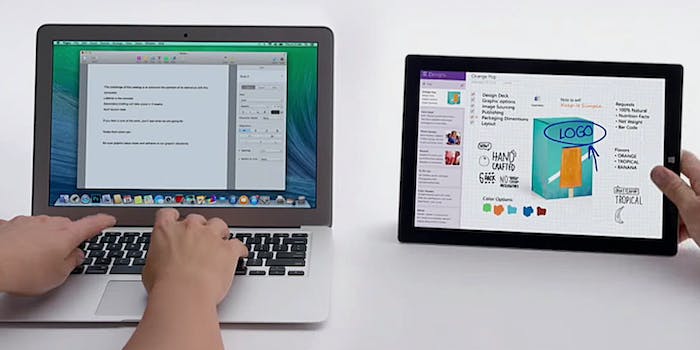 Is Microsoft becoming the new Apple?

Is a market switch upon us?

Apple has long been seen as the cool, innovative company, the one that would buck trends. Microsoft, on the other hand, was the safe bet, not really trying to force the market to its will, but rather service it wherever the market demanded. Both companies recently lost their leaders—Steve Jobs passed away in 2011 and Steve Ballmer left Microsoft in 2014.

Has there been a principle switch?

To some extent, yes. In the mid-aughts, Apple was trying to take a play from Microsoft’s dominance in the computer space. MacBooks were seen as expensive boutique machines that only professional photographers used. Clearly, Apple needed to steal some of the general computing audience from Microsoft. Along came one of the most effective marketing campaigns by Apple: the “Get a Mac” ads.

The campaign also launched at the same time as Microsoft’s Vista, which was plagued by issues. These ads highlighted Windows’ problems, as well as the general ease of use Apple products could offer.

The campaign clearly worked: Excluding tablets, Apple’s PC marketshare in 2005 was hovering around five percent. Now Apple’s PC dominance stands at around 10 percent global market share. If we include tablets in the equation, Apple’s share hovers closer to 20 percent. That’s quite a chunk to gain in less than a decade.

But that was Apple then. The little guy, trying to make it in a PC-dominated world. But now?

Let’s take a look at the most recent ad from Microsoft. The company is taking a jab at Siri by showing off Cortana.

While it might not have the witty banter of those “Get a Mac” ads, it’s effective nonetheless. Right now Microsoft’s Lumia phone line is nowhere near Apple’s iPhone global market share, but it does seem to be growing in very specific regions over Apple. (Granted, in some cases Lumias are $400 cheaper than iPhones.) Substitute smartphones for computers, and Microsoft is in the same situation Apple was a decade ago. And now it’s pushing the same types of ads Apple did.

Another example is the battle between the iPad Air and the Surface Pro 3. Both are absolutely tremendous machines, but Microsoft still uses advertising to paint itself as the superior choice.

In this case, Microsoft’s ad push does seem to be working. The Surface, as a product line, had a very shaky start, and the Pro 3 cannot seem to catch a break from the NFL or CNN. But now it’s trending to be Microsoft’s next billion-dollar business.

The one argument that Microsoft fans would hold over Apple is cost. In the desktop world, that’s still the case by quite a wide margin. But when it comes to ultrabooks, Apple is the cheaper option. Let’s take a look at the base 13-inch MacBook Air. Over at Best Buy, the machine will run you about $950. Microsoft’s direct competitor to the MacBook Air this holiday season, as detailed in an ad, was the 13-inch Lenovo Yoga 3 Pro, a device that will run you $1,300. That’s a huge price difference, even considering the Yoga 3 Pro has double the RAM and hard drive space.

Under Jobs, Apple was a company that would do things its own way. Under Tim Cook, Apple seems more worried about keeping investors happy than stubbornly pushing its design. Take the iPhone 6 and iPhone 6 Plus, each sporting much larger screens to compete with major competitor Samsung. Apple made this move to try and gain some share in a very stubborn Asian market, which prefers larger phones.

The change is in stark contrast to the ad Apple pushed out two years ago in response to larger screens.

Compare that to the ad for the iPhone 6 Plus.

This second ad just seems so… not Apple. It’s not smart or subtle. Couple that with the Apple Watch announcement back in September, and it feels like Apple is creating reactionary products rather than acting as the forecaster.

Compare that to Microsoft’s smartwatch… or rather, smartband. It’s a device that’s not putting itself out there to compete with the Samsung Gears, Pebbles, and Apple Watches of the world, but rather to be a supplementary fitness device, one that works across all platforms and gathers all fitness data into one hub. It’s not going to enjoy the status that the Apple Watch will, and it certainly doesn’t come with all the bells and whistles, but when you compare this product and vision to the “old” Microsoft, it’s absolutely a major creative strike from what’s been labeled an unimaginative company.

Right now Apple is coasting on its loyal fanbase and the positive press it receives, even if that means twisting a few arms. Microsoft is playing catchup and is doing everything it can to set itself apart as the premium hardware and software provider. The company is practically giving away free Cloud storage space, and is giving more free options to consumers to keep its dominance over Google software.

None of this means Microsoft will become the new Apple, or Apple the new Microsoft; in a lot of ways Microsoft is still the same lingering machine it was 10 years ago. But it’s possible that respective regime changes are stirring the waters. These are not the cliche companies we used to know. What will they become?