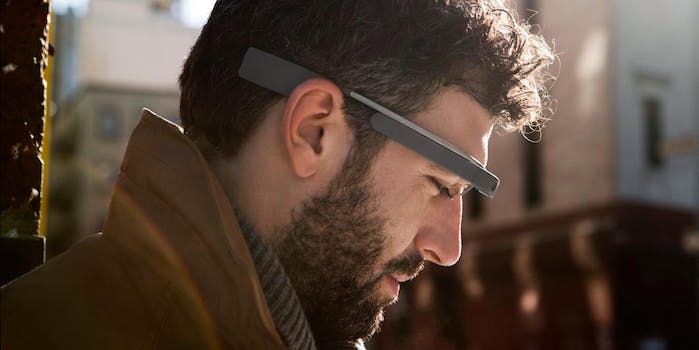 Google’s plan for Glass is murkier than ever

What will become of Google's most experimental product?

More than a year ago, Google Glass arrived with a bang, but in recent months, buzz around the most contentious wearable of all sounds closer to a whimper. Once Google’s pride and joy, Glass has been conspicuously absent from public appearances by Google execs in recent months. Twitter dropped support for its Glass app in late October, sounding a death knell for other Glassware developers. Now, sources suggest that Google has delayed the device’s consumer launch until 2015.

It’s difficult to gauge what exactly the strategy is with Glass at the moment. Will the project be abandoned altogether? Will Glass be remixed into a more fashionable, consumer-friendly product with the help of of new hires from the retail world? It’s anyone’s guess.

The Glass Twitter and Google+ accounts appear healthy and chugging along, happy to buzz about Glass even if Google’s leadership won’t. In a visit to Google’s Mountain View, Calif., headquarters this week, Google Glass didn’t make a single cameo among the hundreds of Googlers efficiently milling about its hive. I thought about wearing Glass there—where better to be safely out as a Glass enthusiast?—but I didn’t bring it. By chance, I ended up toting a Project Glass water bottle that I’d managed not to lose.

Last Sunday, at the Breakthrough Prize, Google cofounder Sergey Brin—once photographed wearing Glass on a downtown 3 train in Manhattan—appeared on the red carpet, face unobscured by Google X’s hard-to-miss smart visor. I was there and took note of it at the time. It’s actually sort of striking when Brin isn’t wearing Glass.

It was a black tie event, but a year ago it would have been exactly the sort of high-profile appearance that Brin wouldn’t be caught dead at without Glass. It’s worth noting that Astro Teller, head of Google X—the mad science division that dreamed up Glass to begin with—attended sans Glass, as did Google’s newly promoted head of product, Sundar Pichai. At the end of the night, the Glassless Pichai and Brin milled around the valet line before Brin took off alone in one of two white Teslas parked nearby (the other may have belonged to Brin’s wife, 23andMe CEO Anne Wojcicki; the couple is now separated).

At its annual Google I/O event this year, Glass wasn’t mentioned on the same stage it debuted on, amidst an over-the-top skydiving stunt, two years prior. I was there that year, and the company talked Glass up with the untempered pride of a new parent. Curious, I pre-ordered Glass, along more than 1,000 other attendees. When Glass shipped a year later, public excitement was still palpable. So was public aversion—everyone had something to say.

Now, buzz has waned—and Google seems to be making deliberate choices to hasten the hush. Glass is selling on eBay for half its list price of $1,500. Before Glass debuted, pre-order auctions selling Glass, although contractually forbidden by Google, easily fetched double the going rate.

Earlier this year, at the Grow conference in Whistler, B.C., Chris O’ Neill, business lead for Google Glass, talked around the company’s Glass strategy for the coming year. “The present is wearables,” he observed, wearing the only pair of Glass in the house. Meanwhile, Google has thrown considerable resources into developing intermediate wearables, in the form of Android smartwatches. Unlike Google Glass, which has never formally exited the beta stage, Android Wear devices like the Moto 360 and the Galaxy Gear are intended for normal consumers and not doe-eyed dreamers with deep pockets.

For better or worse, less Earth-shattering devices—ones designed for the present—may have a better shot than the one that arrived too soon.