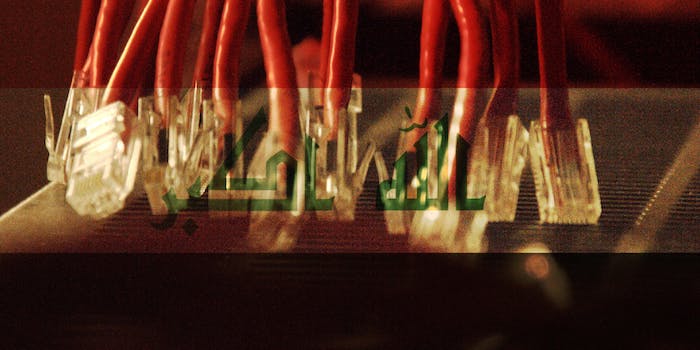 “We are disturbed by reports of access issues in Iraq and are investigating."

The Iraqi government has reportedly blocked access to Facebook, Google, and Twitter over fears that invading ISIS (Islamic State of Iraq and the Levant) militants are using these services and others to coordinate their attacks.

Martin Chulov of the Guardian and Jenan Moussa of Arabic Al Aan TV tweeted this morning that the sites have been blocked.

Facebook blocked in #Iraq. Govt fears it was used by #ISIS to organise & mobilise

Twitter’s meant to be blocked too. But I can still tweet for now. #Iraq #ISIS

And down goes Google and Youtube. All main social media platforms now blocked in #Iraq #ISIS

The AFP reported that WhatsApp and Viber have also been affected. A spokesperson for Twitter would only say that they were investigating reportings from users in Iraq, and that any announcement on the topic would come from the @policy account. “We are disturbed by reports of access issues in Iraq and are investigating,” said a Facebook spokesperson. “Limiting access to Internet services—essential for communication and commerce for millions of people—is a matter of concern for the global community.”

“There is no technical issue on our side and we’re looking into the situation,” a spokesperson for YouTube said.

ISIS has maintained an aggressive social media campaign (essentially a propaganda effort) concurrent with its invasion of Iraq. Unconfirmed reports emerged on Twitter this morning that the militant group had executed some 1,700 captured Shia soldiers; 2,500 captured Sunni soldiers were pardoned.