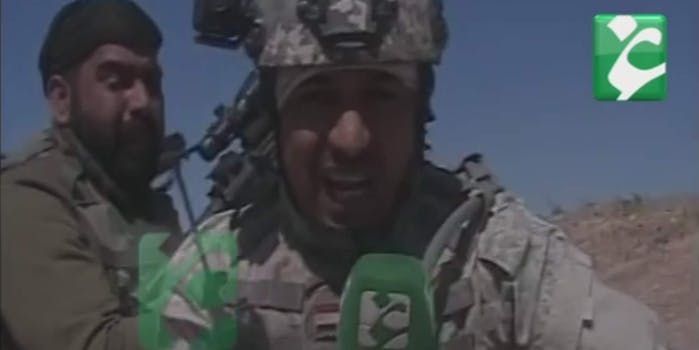 It's a risky job, but it yields visceral glimpses of the regional war.

The Islamic State is in retreat. After months of military frustrations in Syria and Iraq, militants from the Islamic State of Iraq and Syria (ISIS) suffered a major defeat a few days ago when the Iraqi Army pushed them out of the major city of Tikrit. The city, about 111 miles north of Baghdad, sits in the heart of the country and is a major strategic site.

Just 33 miles outside of Tikrit, however, the mountains are still alive with firefights as Iraqi forces push north and west toward Islamic State strongholds.

This new battle is being captured on video by journalists on the front lines and broadcast to the world nearly in real time.

In the video above, taken in the Hamrin Mountains directly northeast of Tikrit, a counter-attacking Islamic State suicide vehicle laden with explosives was stopped dead in its tracks. The vehicle was reportedly an M113, an American armored personnel carrier stolen by the Islamic State during their initial march across Iraq.

The reporter on the scene is with Al-Ghadeer, an Arabic-language television station that broadcasts by satellite across the Middle East.

Incredible scenes like this come with a big risk. Another Al-Ghadeer reporter was recently injured in the same battle just days ago when Islamic State militants killed dozens of Iraqi Army soldiers, according to reports.