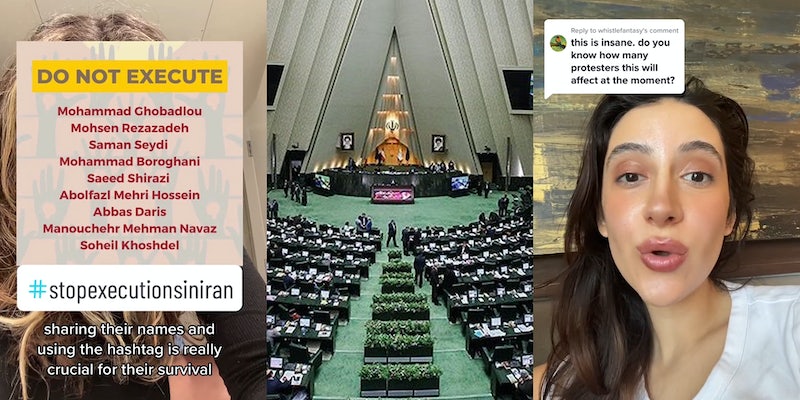 More than 15,000 arrested protesters could face the death penalty.

As the protests against the Iranian regime sparked by Mahsa Amini’s murder refuse to relent, the government voted that the nearly 15,000 protesters arrested so far should face the death penalty.

Despite this vote occurring on Tuesday, there has little international outrage. However, Iranians on TikTok, both in and outside of the country, have been working tirelessly since then to bring this potential mass atrocity to the world’s attention.

So far the Iranian regime has killed hundreds of protesters. Numerous children have been killed for taking part in the protests, possibly including a seven-year-old girl.

Multiple families have come forward accusing the state of pressuring them to claim their family members’ deaths were accidental or were committed by the protesters. One family reported that they were forced to pretend their son had been a member of the brutal state-run paramilitary force and that rather than being killed by the state, he had been killed by protesters.

The regime appears to be using these protesters’ deaths—and the claim that other protesters are responsible—as justification for ordering this mass execution. The letter was signed by 227 members of Iran’s 290-strong parliament. It called for executions of protesters for “attacking lives and property.” It also compared them to ISIS. Saying this was necessary in order to protect the “life, property, security and honor” of their “dear people,” the signatories openly admitted it was intended as a “good lesson” for all protesters who oppose the regime.

Imprisoned protesters are also being tortured and there are reports of numerous women being raped in custody. Evidence of sustained sexual assault has been found on the bodies of the women and girls who are brought into hospitals, both alive and dead.

Social media is full of reports of imprisoned women asking their lawyers for access to abortion and morning-after pills as they are being subjected to repeated rapes in prison. Iran has a policy of subjecting virgin women to rape prior to their executions, in order to avoid killing a virgin, which is prohibited.

Iranian TikTokers are not just attempting to spread awareness of these atrocities but are trying to get the international community to take action.

@thatdaneshguy I hope more than anything that the officer is identified one day. #mahsaamini #nikashakrami #freeiran ♬ original sound – Danesh دانش

In particular, many of these TikTokers are trying to get the names of specific protesters who have been arrested trending in an attempt to stay their executions.

The Iranian regime has a track record of backing down from executing prisoners who become international names in order to avoid backlash and sanctions from other nations. Iranian activists are asking the international community to make these protesters’ names hashtags in the hopes of “saying their names to save their lives.”

Others are advocating for their audience to use hashtags like #stopexecutionsiniran in the hopes of having a similar impact on a broader scale for all the condemned prisoners.

Whether it will work remains to be seen.