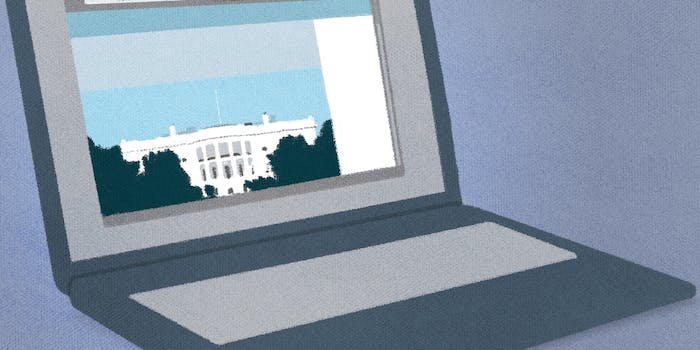 With flaws and all.

If you’re curious about what the U.S.’s controversial proposed deal with Iran actually looks like, wonder no longer.

It’s now published in full, on Medium, for anyone to read.

The proposal, brokered by the U.S., its allies in Europe, Russia, and China, is high-stakes politics. According to the State Department’s introduction, it’s a necessary evil to keeping Iran from becoming a nuclear power in the near future.

“To those who are thinking about opposing the deal because of what might happen in year 15 or 16—remember that, if we walk away, year 15 starts tomorrow.”

The deal “blocks every possible pathway Iran could use to build a nuclear bomb while ensuring—through a comprehensive, intrusive, and unprecedented verification and transparency regime,” the State Department says. In return, Iran gets both a the ability to build out nuclear power production and lessened restrictions for shipping oil to other countries.

The plan needs to be ratified by Congress before the U.S. officially enters into it, and that’s prompted a litany of critics who oppose the White House’s stance. Unsurprisingly, it comes largely from two major schools: members of Congress who have strong connections to Israel (Israeli Prime Minister Benjamin Netanyahu travelled to Washington to convince his allies in the U.S. to reject the deal), and conservatives who think it’s either too weak on Iran or paves the way for them to create a nuclear bomb in 10 years, when the deal expires.

The post is annotated with commentary from people who oversaw the deal, like Secretary of State John Kerry and nuclear physicist-turned-Secretary of Energy Ernest Moniz.

To allay fears that since Iran doesn’t have to dismantle its centrifuges, for example, Kerry points out the section that will “enable the United States to mobilize the international community to take swift action, including snapping sanctions back into place” if Iran falters on its side of the deal, as it has with past deals.

To counter concerns that standard inspections require giving Iran a 24-day heads up, Moniz points out that the coalition of countries behind the deal “can request access to any suspicious location with 24 hours’ notice.”

Not even Kerry, however, explicitly argues that it’s a good deal, or that it’s a surefire way to permanently stop Iran from obtaining a nuclear weapon, though the text does attempt to ensure exactly that. Instead, he claims, it’s simply the best way to mitigate possible bad outcomes.

“To those who are thinking about opposing the deal because of what might happen in year 15 or 16—remember that, if we walk away, year 15 starts tomorrow—and without any of the long-term verification or transparency safeguards that we have put in place to ensure that we prevent Iran from acquiring a nuclear weapon,” he wrote.

Congress has until Sept. 17 to vote yes or no on the deal.