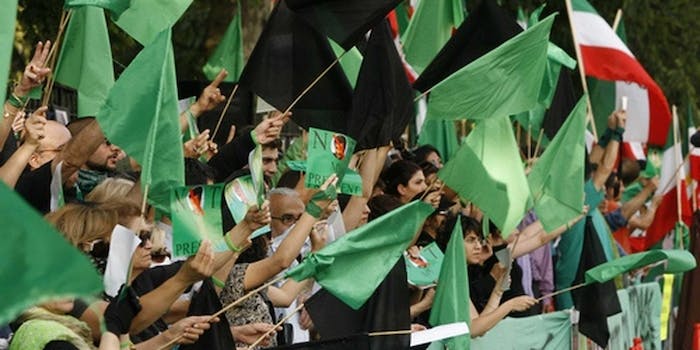 You can learn a lot about Iran from what it doesn't want its citizens to read.

To better understand how the Iranian government censors the Internet at large, researchers at the University of Pennsylvania’s Annenberg School decided it was best to look out how the Islamist regime controls one of the Internet’s most popular sites: Wikipedia.

Despite the recent election of a reform-minded president, those studying Persian-language Wikipedia through Iranian proxy servers found the government still uses heavy handed censorship tactics to keep citizens from accessing articles on everything from political assassinations to homosexuality to Emma Watson.

“Understanding what Iranian censors block on the Internet helps demonstrate what information officials find most objectionable as well as the extent to which Iran’s Internet censorship policies may violate international law,” write the study’s authors, Collin Anderson and Nima Nazeri. “Wikipedia, the popular open-source online encyclopedia, provides a useful place to uncover the types of online content forbidden in Iran.”

Anderson and Nazeri discovered 936 unique blocked articles out of some 800,000 total persian Wikipedia entries. And indeed there’s much to be gleaned by what topics the government chooses to block. 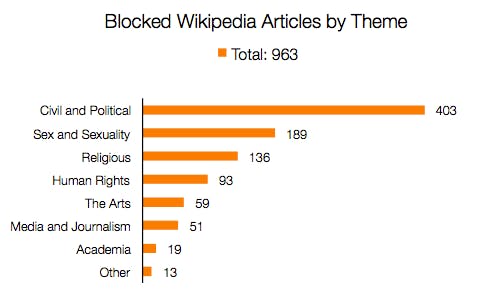 Of the censored articles, a whopping 75 percent related to politics, sex or religion. Not surprising from a country whose strict Islamist code has imposed many theocratic rules onto its citizens over the years. Among the most frequently blocked articles were ones related to the Baha’i faith.

“The Baha’i faith is Iran’s largest non-Muslim minority religion, and arguably the nation’s most persecuted religious group,” the study notes. “Iranian religious authorities often regard it as a heretical deviation from Islam.”

A strong bent toward religious orthodoxy also leads censors to block access to many pages related to sexuality. Of 189 total censored articles about sex, 52 dealt with specific sex acts, while 26 dealt with anatomy, 17 with pornography, 13 with LGBT topics, and 8 with female clothing, among others.

When it comes to the censorship of political articles, 129 of the omitted entries related to Iran’s contentious 2009 elections. Another 23 entries related to Green movement that sprang up after that election to protest the reelection of religious hardliner Mahmoud Ahmadinejad.

Fifty-six of the censored 2009 election articles are biographical in nature, providing information about specific protest leaders. This underscores another major trend in Iranian censorship. Half of all blocked pages are about individuals. And half of those people have either been killed or allegedly detained by Iranian authorities. For instance, 23 of those biographical articles are related to the 1990s “Chain Murders” in which the Iranian Intelligence Ministry was publicly implicated in a series of assassinations of leading intellectuals, activists and cultural figures. 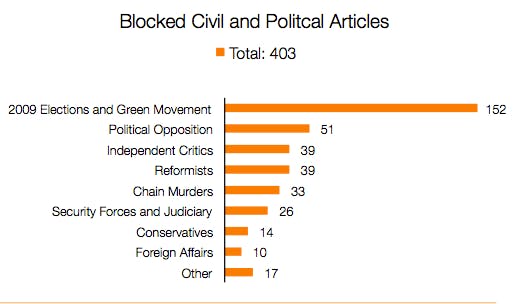 Much of the political upheaval and censorship comes at a time when Persian Wikipedia is greatly expanding. Researchers say the number of articles on the site has increased tenfold since 2006.

“The legacy of the disputed 2009 elections, the ensuing social upheaval, and the state’s repression of protests and activists has given birth to a large number of Wikipedia entries,” Anderson and Nazeri write. “Iranian censors have filtered many, if not all, of these entries. Indeed, the state’s restriction of free expression by authorities after the 2009 election is mirrored in the patterns of filtration of Wikipedia Persian.”

As the study’s authors note, these findings come at a time when Iran seems to be at a political crossroads. Following political unrest under the administration of Ahmadinejad, the country has turned to the moderate Hassan Rouhani, who among other notable reforms, has opened up communications with the United States for the first time since 1979.

Rouhani is on the record as saying he believes in the right of all Iranians to access online information, but with the caveat that it must fall within certain legal and cultural limits. But the researchers say these limits run afoul of speech that is protected by international law. The UN’s International Covenant on Civil and Political Rights expressly protects speech related to public affairs, human rights, journalism, cultural expression and religious discourse.

“These types of speech and information are exactly what Iranian authorities are blocking on Persian Wikipedia and thus Iran’s actions are at odds with its international legal obligations,” the report concludes.