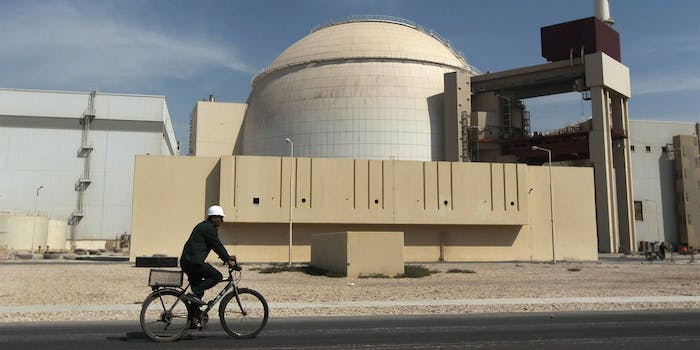 Conspiracy theorists want to believe the Iran earthquake was a U.S. secret weapon

It's a fanciful conspiracy, and one that won't die.

Iran had a busy and not very good day on Jan. 7. Within hours of the Iranian military firing missiles at an American airbase in Iraq, a Ukraine International Airlines 737 crashed after taking off from Tehran, killing everyone aboard.

And right around that time, the area around Iran’s Bushehr Nuclear Plant was hit by two moderate earthquakes within an hour.

Was there an earthquake, a plane crash, and a missile in Iran in the same night?

Earthquake conspiracy theories started right away. Believers have speculated for years about the U.S. government’s purported ability to use “earthquake weapons” or kinetic energy devices (often called “rods from god”) to make the earth shake at will. In particular, rumors continue to fly that the atmospheric research antenna array HAARP, located in Alaska, is the government’s weapon of choice to create earthquakes—even though it has absolutely no power to do so.

Oh they playing the HAARP on em now huh? https://t.co/SUy8Mmt22K

Wtf? Plane crash and now an earthquake in Iran? Far too many coincidences #HAARP

HAARP is the easy scapegoat for almost every weather or tectonic event on Earth, but HAARP is merely a series of antennae that slightly heat up a portion of the ionosphere for researching how signals travel through different states of matter. It can’t create earthquakes, control minds, seed clouds, or cause hurricanes. HAARP is a publicly accessible research facility that isn’t even in operation much of the year.

The conspiracy theories about it are almost all attributable to a mid-1990s book, and none have ever been proven with solid evidence.

And while they’re a staple of science fiction and make headlines every time they’re tested, “rods from god” are far from a battlefield deployable weapon, and wouldn’t do the kind of damage an earthquake could do.

In fact, despite boundless conspiracy theories, earthquake creation is simply beyond the capability of human technology. The closest thing to an artificial earthquake we’ve seen are the ground tremors that happen when a nuclear weapon is tested deep underground. Such a detonation was speculated to be the “real” cause of the cluster of earthquakes below California’s China Lake Naval Weapons Station in July 2019. But underground nuclear tests leave a substantial footprint of excavated material, of which there was none seen outside the Bushehr plant.

Finally, Iran is extremely earthquake-prone in general. The Bushehr area in particular has been rocked by a number of earthquakes in recent years, including a 6.3 magnitude tremor in 2013 that killed 37 people. Just a week before the January quakes, the area around the plant experienced a similar size quake—and none of these damaged the plant itself, which is retrofitted to withstand much larger shakes.

It’s also unclear what the U.S.’s goal would have been in launching some sort of seismic event like this at a plant capable of withstanding the force of it.

While the earthquake can easily be written off as something that just happened to take place around the same time and place as the missile strike, the plane crash can’t be. If Twitter conspiracy theorists are looking for something to dig up the truth about, it’s very possible they found it.

The crash is so recent that all we know are the very basics: the manifest of passengers, the destination, and where the plane went down. It might take a long time to get to the bottom of what Iranian officials deemed the “technical issue” that brought the plane down.

But its proximity to the missile strikes brought out a flurry of rumors that it had been brought down by Iran, either by accident thanks to an overzealous, anti-aircraft missile battery on high alert or on purpose as a “false flag” to pin on the U.S. and launch another round of strikes.

What are the odds Iran shot this plane down accidentally? https://t.co/qJr51WCcDt

It's obvious that Iran shot down that passenger plane killing over 170 people.

How will our fake new media spin this horrible story for their new terrorist buddies? https://t.co/fEthWchJt2

And it wasn’t just conspiracy theorists, either. Ukrainian officials refused to rule out that the plane might have been brought down by a missile, while Iranian authorities weren’t willing to turn over the black box of the Boeing 737 to the U.S. so the manufacturer could try to determine what the “technical issue” was.

Social media and click-hungry tabloids muddied the waters with pictures circulating of “holes” in the fuselage of the plane that, supposedly, could only have been caused by an exploding missile.

Mainstream outlets did no better, exclaiming just hours after the incident that it “sure looks like” the plane was brought down by a missile and quoting aviation groups calling it a “shootdown event,” despite the investigation only just starting.

And no less than conspiracy theory guru QAnon has claimed (without evidence, of course) that “7/10 plane crashes are targeted kills.” Naturally, that got the QAnon community going that the crash was somehow linked to the missile strike, coming up with a convoluted mythology that the plane was brought down by the deep state to kill one of the passengers or intensify the conflict between the U.S. and Iran, reducing the crash victims to props in a game.

On a CIVILIAN flight that occurred in air space that I thought was shut down.
From Ukraine.

This must be one of those 'real' flights.

But we got video. https://t.co/iKp0d0SbNk

Ultimately, the crash might have something to do with the missile strikes, but it just as easily could have been a totally random event that just happened to take place around the same time.

We can discard the earthquake weapons theory because it has no supporting evidence. But any potential link between the crash and the missile strike still falls squarely into the category of “we don’t know.”

And until we know more, that’s the only answer that makes any sense. No matter what narrative people push.