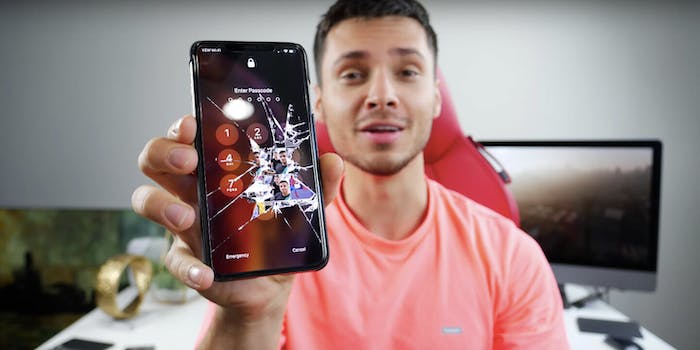 Two YouTubers have proved that it’s possible to hack iPhones and bypass lock screens without using a passcode in iOS 12, allowing access to personal contact information and photos.

The video shows Rodriguez unlocking an iPhone 8 by using Siri to enable Voiceover, sending a text message from another phone to the iPhone, then double-tapping at a crucial moment. The action allows uninhibited access to the iPhone’s contacts and photos.

YouTuber EverythingApplePro uploaded a similar video that was released to over 6 million subscribers on the same day. His video shows that the same hack works on the new iPhone XS Max. Any device running iOS 12 or iOS 12.1 seems to be vulnerable. The hack can also allow access to your personal email addresses and birthdays, according to Mashable.

Of course, if someone wanted to hack into your phone using these methods, it would require physical possession of your phone and some time. There are multiple steps involved, and it can’t be done remotely.

But both YouTubers proved that with the right kind commands, pretty much anyone could hack an iPhone running iOS 12, despite Apple’s efforts to make its phones secure.

If you’re concerned about your phone falling into the wrong hands and getting hacked, you can disable Siri’s lock screen access, according to Naked Security. To make the change, head to your iPhone’s settings and select face ID & passcode.