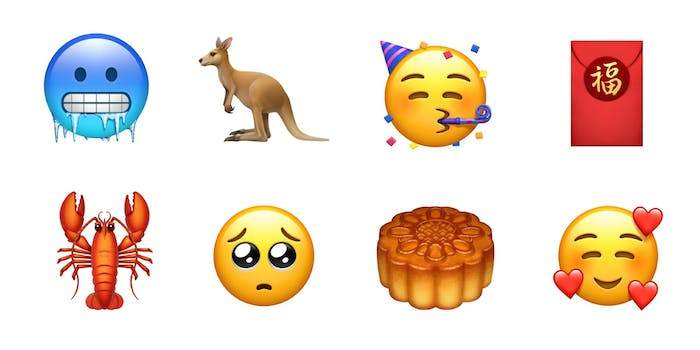 We're finally getting a bagel emoji.

Apple’s latest iOS update is on the way, and the iPhone’s most important feature is about to get a major update. That’s right, we’re getting new emoji.

Over 70 new emoji are coming to iPad, Apple Watch, Mac, and iPhone in the iOS 12.1 update. These new emoji include a frozen grimacing face, a smiley surrounded by hearts, a gray-haired emoji, a bald emoji, and a partying emoji.

There’s also updates for sports, foods, and objects too. For instance, Apple is adding in a red gift envelope, which is commonly used during Chinese New Year and Chinese weddings. There’s also a new travel suitcase emoji, a softball, a skateboard, and a lacrosse stick with a lacrosse ball. Best of all, iOS 12.1 even brings new animal emoji, including a mosquito, swan, and a llama.

Oh, and we’re finally getting a bagel emoji. It’s about time, Apple.

All 76 new emoji have since been revealed to the public, and you can check them out in a tweet from Emojipedia’s Jeremy Burge.

Apple users won’t have to wait long for iOS 12.1’s emoji update. Apple’s developer and public beta previews for iOS 12.1 went live yesterday and feature the new emoji, and Apple says the additions will be available in “upcoming software updates” for iOS, macOS, and watchOS.

In the meantime, Duke University, the University of Alabama, and the University of Oklahoma now support Apple Wallet access to student IDs, letting undergrads pull out their smartphones to pay for meals or access school dorms. The feature is available for both Apple Watch and iPhone, and Apple claims that Johns Hopkins, Santa Clara, and Temple University will also receive the feature “by the end of this school year.”