They all resulted in convictions—so why the fight?

The Apple vs. FBI legal fight was only the beginning.

On Wednesday, members of the Senate Intelligence Committee released the final version of a bill that effectively requires companies to build so-called “backdoors” in their encryption technology—the latest salvo fired in a years-long fight known as the new “crypto wars.”

The Compliance with Court Orders Act of 2016—co-authored by Sens. Richard Burr (R-N.C.), chairman of the Committee, and Dianne Feinstein (D-Calif.), the Committee’s top Democrat—aims to force companies like Apple and Facebook to turn over decrypted data to the government, or otherwise help the government obtain that data, when served a warrant related to violent crimes or serious threats.

Privacy advocates quickly denounced the legislation as “ludicrous” and “dangerous,” and members of the Senate from both parties condemned the bill.

If this dangerous anti-encryption legislation reaches the Senate floor, I will filibuster it. Period.

Cyrus Vance, Jr., would likely disagree with that sentiment. As Manhattan’s district attorney, Vance is one of the highest-profile law-enforcement officials in the United States—and one of the country’s most vocal critics of strong encryption. Vance has held speeches, written op-eds, and testified before Congress to let the world know that his office has over 200 locked iPhones from criminal cases that law enforcement need to access in order to do their jobs.

While Vance did not respond to a request to comment on the Burr-Feinstein bill, Vance’s office said in March that the iPhones in their possession have “evidence believed to be critical stored on the devices,” and the district attorney supports legislation that forces companies to build special backdoor access into their devices for law enforcement.

But exactly which iPhones does New York County’s district attorney want to unlock?

According to records obtained by the Daily Dot through the Freedom of Information Act, some of the locked iPhones belong to convicted small-time drug addicts, street-level drug dealers, late-night muggers, fraudsters, and a rapist.

Of the 74 cases for which we filed FOIA requests, the New York District Attorney released records on 10 of them. Of those, seven returned substantial records.

One of the 10 cases we were able to access was redundant (Parham), and two more were impossible to find due to mistakes made on the case chart by the District Attorney’s Office, according to a New York state court clerk.

That leaves the seven cases below, which provide the first specific details about the cases involving locked iPhones that Vance’s office wants to access through legal action.

In every case we were able to view, prosecutors secured a conviction without access to the iPhone.

Case details: Darnell Smith (male, 30) and Nahun Nunez (male, 22) allegedly tried to use a stolen credit card, debit card, and public benefit card buy two iPads and four iTunes gift cards at Target worth $711. On another occasion, Smith bought two Xbox consoles with the cards. He was caught when the transaction was declined.

Charges: Criminal possession of a control substance in the third and seventh degree.

Case details: A beat cop said he spotted 3.74 grams of cocaine sitting on Parham’s windowsill with Parham himself inside his bedroom. The officer entered the apartment and found nine pills of morphine. These are somewhat small amounts of narcotics, but Parham was charged with “intent to sell.”

Parham said everything he had was for personal use to manage the chronic pain he suffers. “I took it for the pain,” Parham told police when he was being interrogated. “I was shot in the back and the arm, and when it gets cold, I am in a lot of pain.” 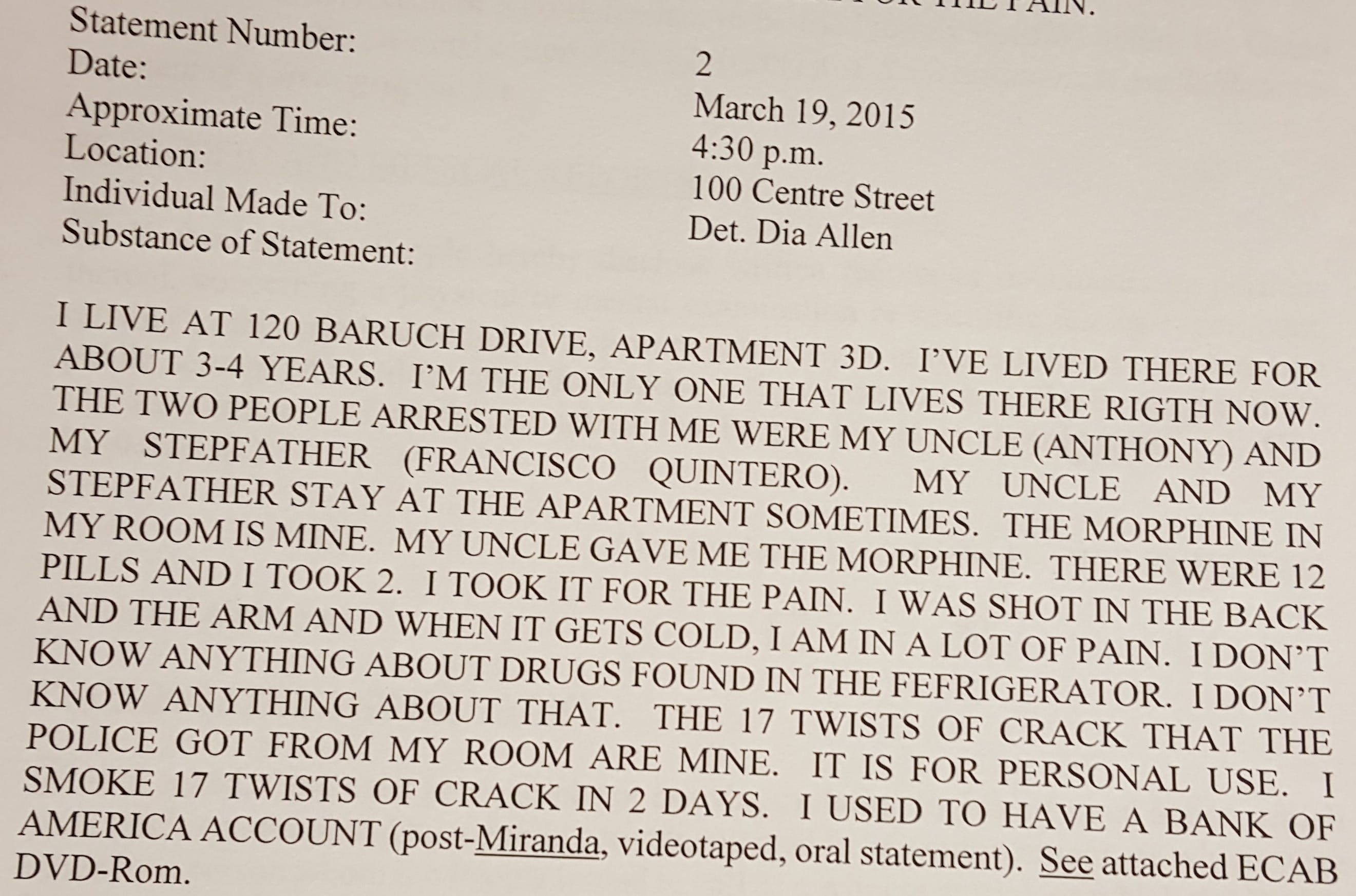 Case details: West was convicted of a 1:30am armed mugging in Manhattan’s Harlem neighborhood. A police officer later found marijuana wrapped in plastic around West’s groin.

West disputed the robbery charges. “We were just smoking,” he told police. “I don’t rob people. I do fraud. I hustle. I’m a drug dealer. But I didn’t rob anyone.”

Charges: Grand larceny in the third degree, identity theft in the first degree, criminal possession of a forged instrument in the second degree.

Case details: Police said Hsi tried to use a forged credit card to buy $3,000 worth of retail products at Bloomingdales. He was stopped and found with five forged credit cards and one forged driver’s license. The cards were all low quality. The print and images were blurry compared to the sharp image and logo of real credit cards. Even the colors of the forged American Express cards were different than those of real cards. 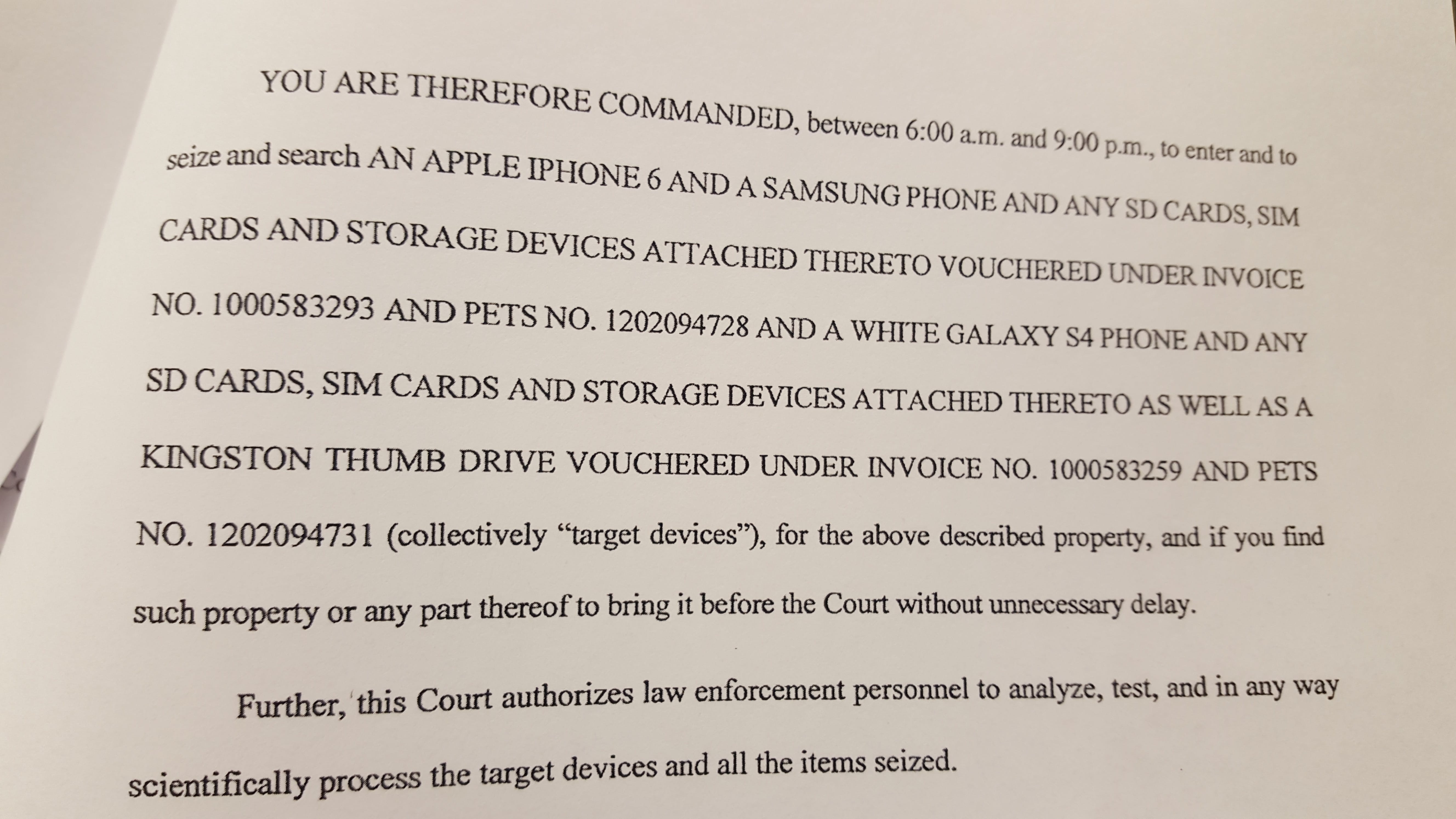 This is one of the few cases where the records show exactly why police want to search the phone. Police say that Hsi admitted he’d receive text messages with products to purchase on his cellphone, and police want to tie Hsi to a larger identity theft ring.

For his part, Hsi said his trouble started with a bad loan of $25,000 from a man named Bo Tao. Hsi said he was to pay 5 percent interest every week on every $10,000 borrowed. He quickly fell under the debt and claimed he was ordered to work to pay off the debt by buying fake credit cards and going into Bloomingdales to buy expensive items. 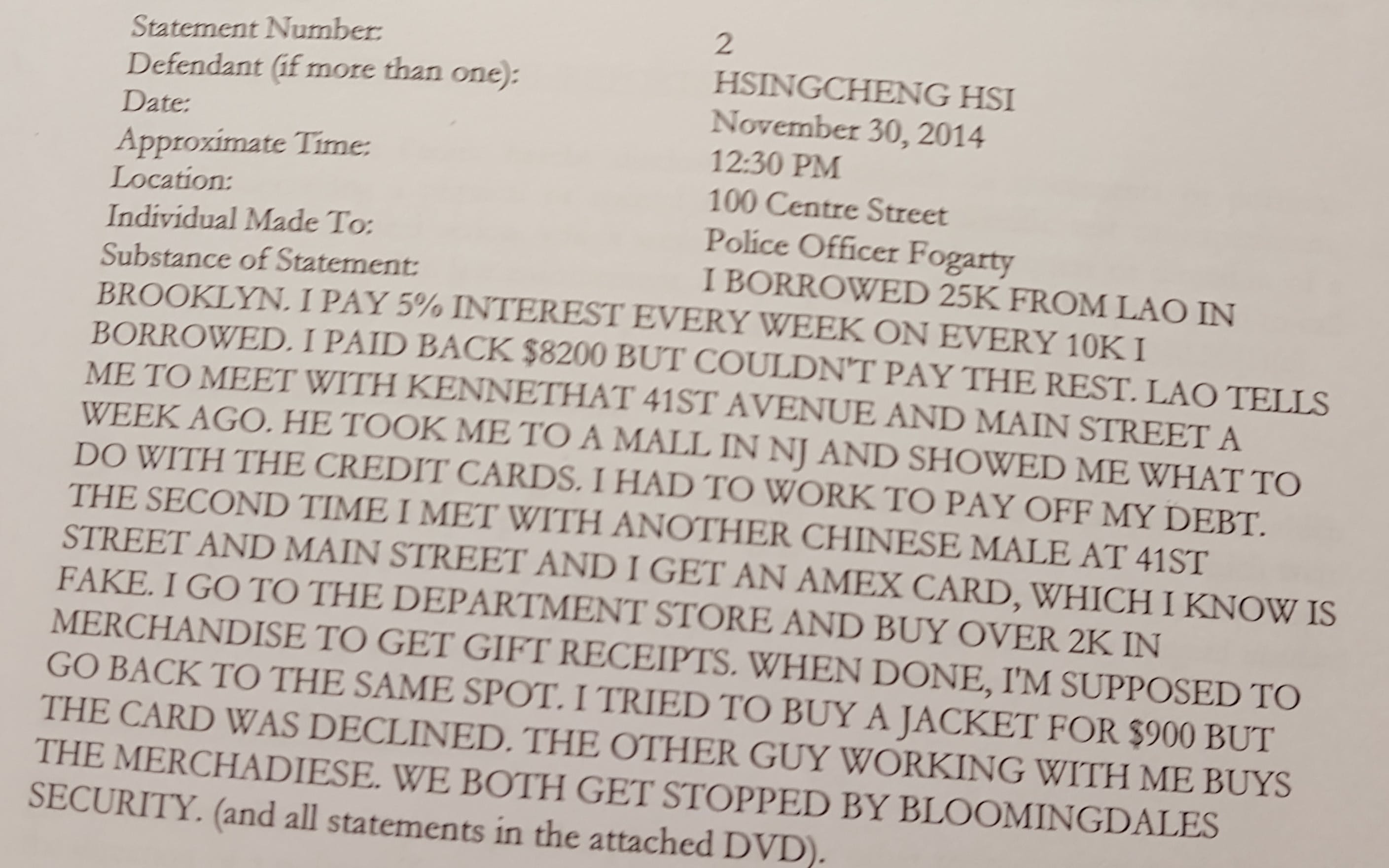 Case details: Police said Lopez forcefully asked ATM customers to deposit checks for the amounts of $840 and $700 and then to return with cash, once under threat of violence. The checks were forged or bounced.

Case details: Police saw Misetzis exchange a ziplock baggie of cocaine for money and then found six more baggies in his pants. The amount totaled 5.82 grams of cocaine.

Those are the cases we were allowed to access, but they represent only a small percentage of the cases before the Manhattan DA’s office that involved locked iPhones. To get a sense of the number of cases, below is one page out of six of the heavily redacted iPhone case chart released by the DA’s office as part of our FOIA request. 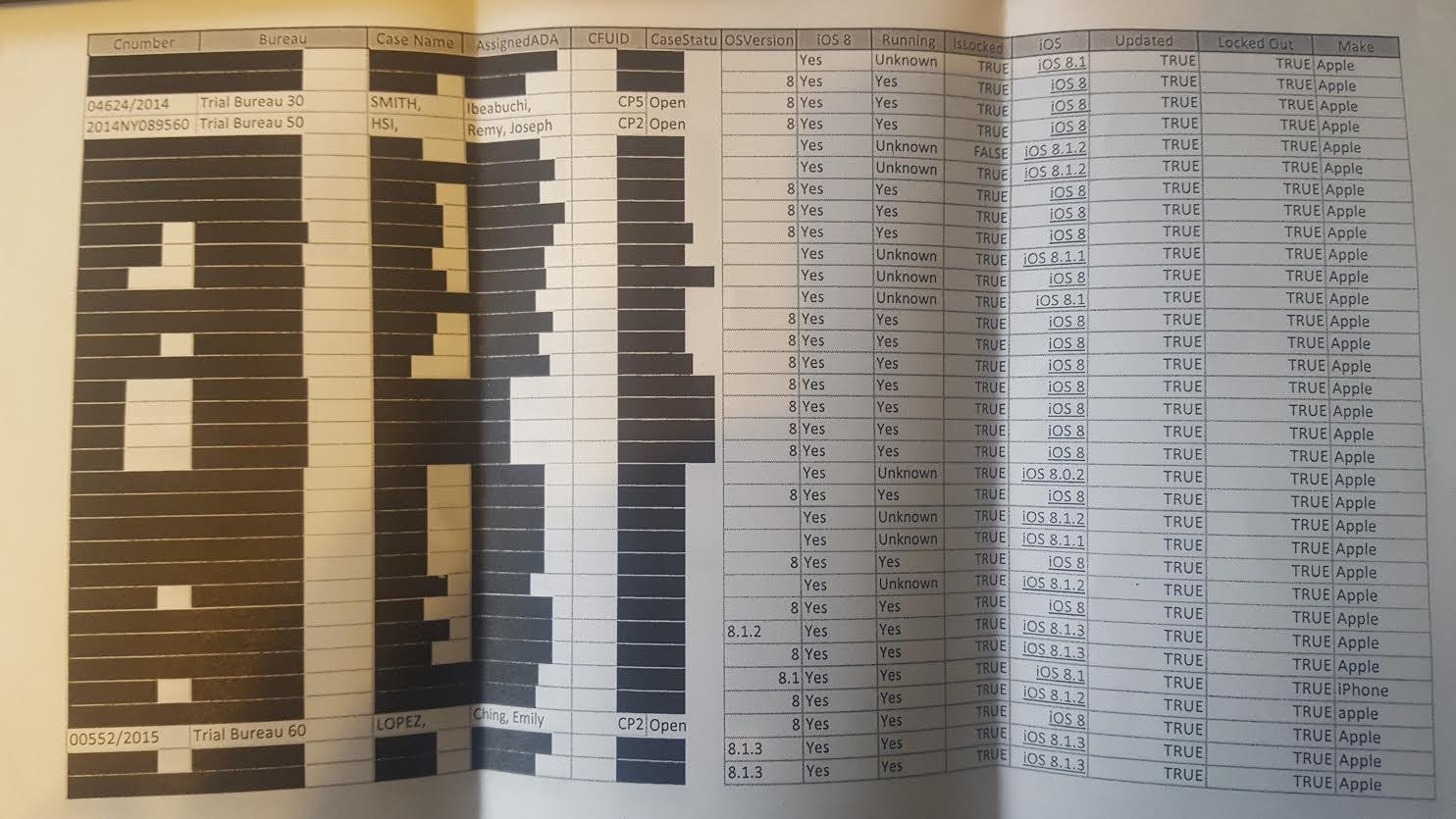 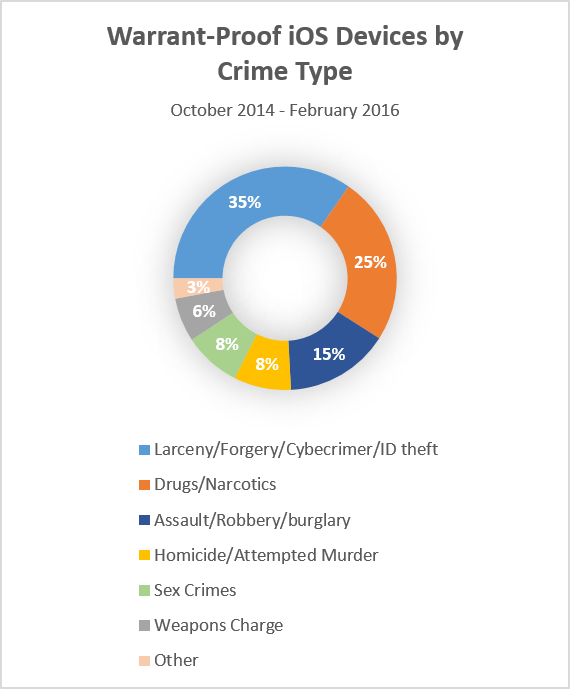