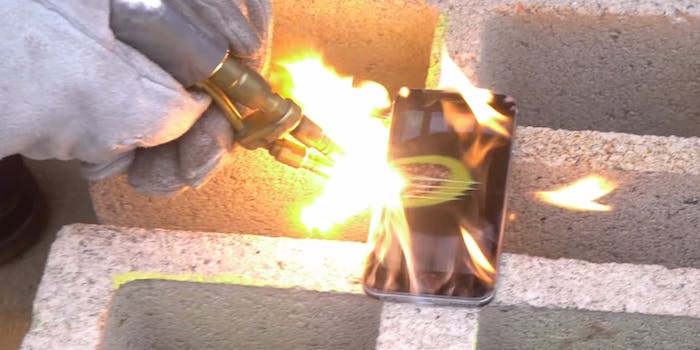 It's the hottest smartphone you'll ever see.

An acetylene torch produces a flame that can easily top 6,000 degrees, which is hot enough to melt virtually any type of standard metal. When you put that kind of temperature up against something so fragile it needs a case—like, say, a brand new iPhone 6—the results are… well, exactly what you’d expect.

TechRax is well known on YouTube for some seriously extreme torture tests, and putting an acetylene flame smack in the middle of one of Apple’s most impressive gadgets is totally fine with them. With a welding mask in place and plenty of safety precautions, the torchbearer turns the iPhone 6 into a steaming, melty pile of electronic waste in just seconds. It’s like an Android fanboy’s dream come true.

Surprisingly, the iPhone’s battery—which is undoubtedly the most volatile component of the entire device—doesn’t produce any fireworks of its own, and simply melts away along with all the other pricey electronic bits.

As you can imagine, the phone (if we can even call it that by the time the test is over) is pretty much worthless after the smoke clears. I guess it might still make a nice piece of modern art.