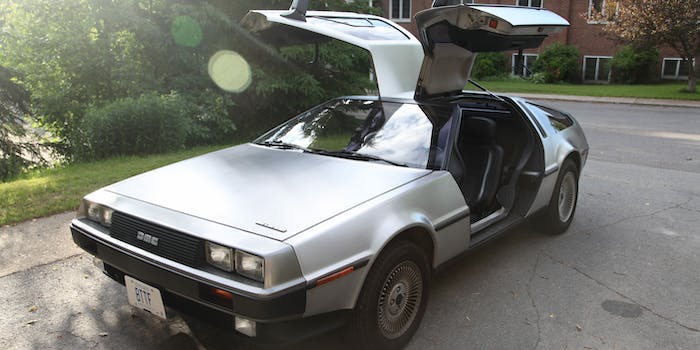 Classic 1982 DeLorean goes back to the future with iPad controls

An enterprising car enthusiast brought his 1982 DeLorean out of the ’80s and into the future. Redditor TheKingofDub updated his DeLorean’s original dash with an iPad, which he programmed to do a ton of different things. I guess you could say… Where we’re going, we don’t need knobs.

TheKingofDub‘s finished iPad controlled DeLorean looks slick. He uploaded a number of photos and videos to show how it works. For example, with one touch, he can lock or unlock the doors and trunk (when the vehicle isn’t in motion), roll the windows up or down, or operate the garage door of his home. He also installed a wireless backup camera, so he can see what’s behind him as he backs out of the driveway—or at any time. “The DMC’s rear visibility is sometimes lacking otherwise—especially with my tinted windows,” TheKingofDub writes.

He also customized the gestures for the iPad’s media controls. By doing that, he can skip tracks or play a song without having to look down at the display. Similarly, he can swipe with one finger to adjust the volume up or down, or use two fingers to mute.

And for more hands-free functionality, he’ll use Google (“OK Google”) for navigation instructions, and Siri to play music. However, TheKingofDub isn’t completely done with his creation yet.

“Future plans include an iPhone version of the app, specifically with an ‘I’ll Be Back’ button, which will automatically unlock and open the door when you get close enough for your phone to connect to the Bluetooth,” he writes on Imgur. For now, he also has a key fob that duplicates many of the iPad’s functions, such as locking doors or opening windows or the trunk.

The whole build really is impressive. For more photos and details on how he created this awesome hack, head over to Imgur. To join in the discussion, visit Reddit.