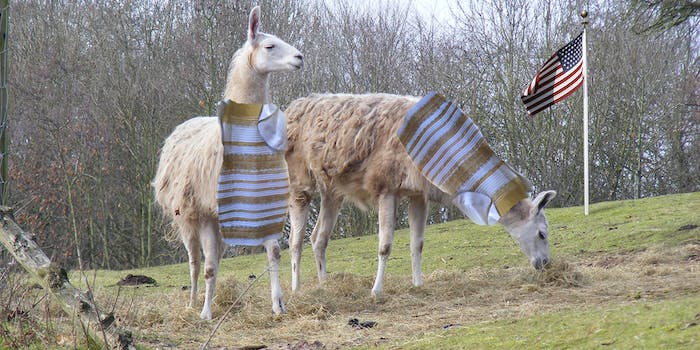 Breaking down the data on llamas, #TheDress, and net neutrality

It was a perfect Internet day. But what story emerged victorious?

Most of us have had the type of hangover where before the hangover, when you’re just beginning a night of drinking, you know what’s coming. There’s even a pre-hangover sometime around midnight, interrupted, perhaps, by a second wind. It’s equal parts noisy, fun, exhausting, and painful. And then the bleak, bright morning comes crashing down. No matter how much greasy food you eat or how many Ibuprofen you pop, it just won’t go away. One moment you’re shampooing, drunk again and giggling at the continued revelry. The next, you’re pressing your forehead against the kitchen tile, praying for the sweet embrace of a coma.

That’s what the last 24 hours have felt like. It’s been the perfect Internet storm.

It all started with the historic net neutrality victory. Then, we were gifted with The Great Llama Escape of 2015. And then, of course, there was The Dress.

Emotions ran high and reactions were quick. You were either engaging like mad with any combination of these trending topics, or you were dismissing the Internet’s predilection for obsessing over the latest oddity to cross its path.

So what won the Internet: net neutrality, llamas on the lamb, or The Dress?

The wizards over at Chartbeat had the answers.

“The Dress had more than 5.5 times the number of concurrents at its peak than the the peak of the net neutrality story,” the Chartbeat folks told me, referencing numbers that its data scientist, Dan Valente, had pulled. “The llama story didn’t really make much of a blip. So vastly more traffic to stories about The Dress.”

But there’s an asterisk here: There was another story about another dress yesterday. The dress that Lupita Nyong’o wore to the Oscars was stolen; reports about that are still making the rounds.

Chartbeat didn’t have time to separate out the two “dress” conversations, but the margin by which the term beat its competitors suggests that The Dress likely still won here—by a lot.

All is not lost, however.

“In terms of engagement, things get a little more interesting/hopeful for the human race,” says Chartbeat. “Overall, The Dress had 2.5 times the amount of total engaged time [of] the net neutrality story.”

But when Chartbeat looked at “Typical Average Engaged Times” across its network, the company found:

The TL;DR here: Most people read about The Dress, but those who sought out the net neutrality story read about it for more time, on average. That might seem obvious—net neutrality is inherently more complicated than a dress’ colors—but think about how long some of us (this author included) were staring at that damn dress last night. 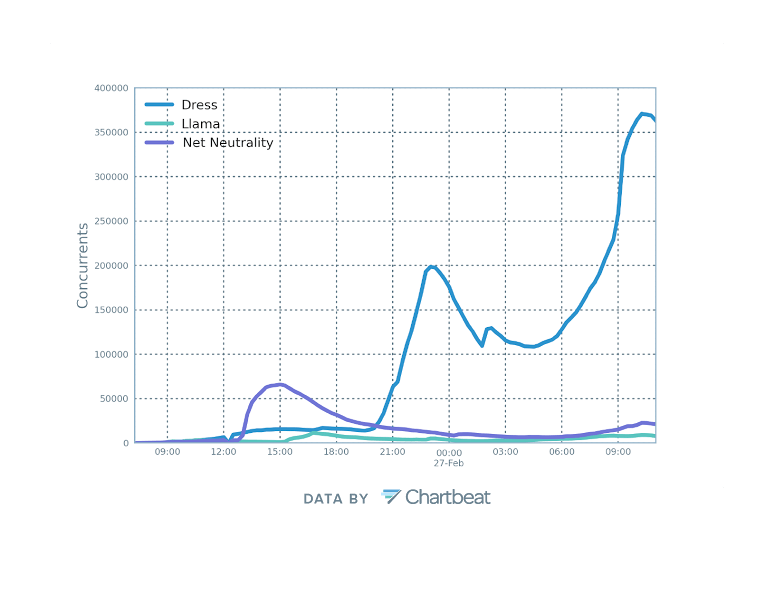 If we were to put this in high school yearbook terms, The Dress won Most Popular, but net neutrality won Most Likely To Succeed. The llamas, meanwhile, got something lame like Most Improved or Best Backpack.

And that is how the Internet’s favorite day broke down. It’s going to be a tough one to beat.