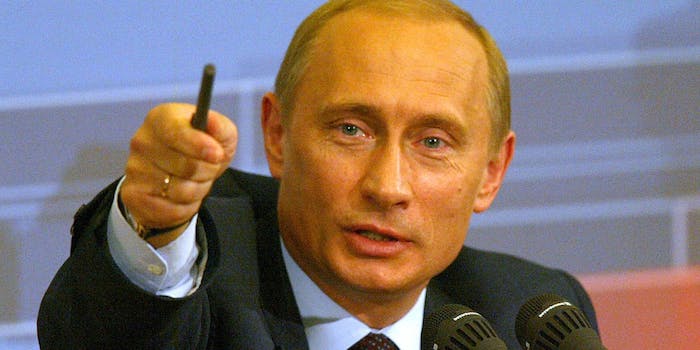 The Internet is a ‘CIA project,’ says Vladimir Putin

Vladimir Putin does not seem to trust the Internet.

The Russian president called the Internet an instrument of the U.S. government, specifically the Central Intelligence Agency (CIA), speaking at a Russian media forum in St. Petersburg on Thursday.

“You know that it all began initially, when the Internet first appeared, as a special CIA project,” Putin said. “And this is the way it is developing.”

ARPANET, the precursor to the modern Internet, was initiated by the U.S. government in the 1960s, but there’s no indication it was intended to be a spying tool. And the modern Internet is widely regarded as a network of networks distributed around the globe, without a central controlling body.

Putin’s claim came in response to a question from a blogger expressed concern at his perception that the president of the U.S. can “shut down communications on the entire planet with a single resolution.”

Putin added that Russia will need to continue to invest and develop its own online companies to best serve its own interests. A transcript of Putin’s remarks at the forum has been posted on the English version of the Kremlin’s website.

The Internet has been a tumultuous subject in Russia of late.

Earlier this week, the Russian Parliament passed an “anti-terrorism bill” that would force Internet companies operating in Russia to keep their data centers on Russian soil and store user data for at least six months. If Putin signs this bill into law, the Russian government would basically have easy access to user data, including communications, from companies like Facebook and Google.

In another apparent act of intimidation by the Russian government, the head of Russia’s biggest social network, Vkontakte (VK), said that he was fired for refusing Putin’s orders to turn over information on Ukrainian dissidents last week.