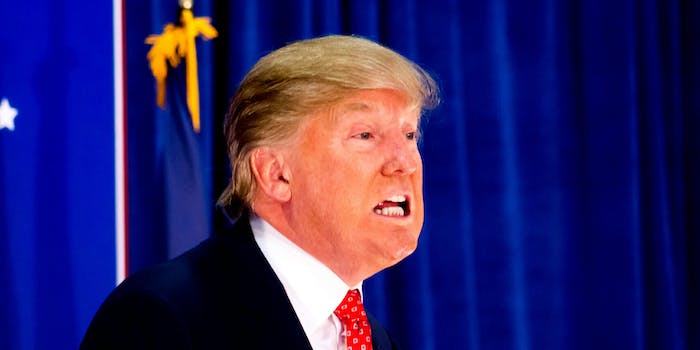 Congressional intern who shouted ‘F**k you!’ to Trump suspended

The intern, who works in Sen. Maggie Hassan's office, was suspended for a week.

The congressional intern who shouted “Mr. President–fuck you!” at President Donald Trump‘s entourage last week has been suspended following the outburst, according to reports.

The intern works for Sen. Maggie Hassan (D-N.H.), according to the Hill, and will be suspended for a week.

“We are aware of the situation and have taken disciplinary action, including a one-week suspension and revoking her Congressional intern ID badge (thereby restricting her access to the Capitol), in response to her breach of office policies regarding respectful and appropriate conduct,” Aaron Jacobs, a spokesperson for Hassan, told the news outlet. “We also facilitated contact with Capitol Police.”

A video of the incident last week showed a group of people walking through the Capitol Rotunda before Trump’s meeting with House Speaker Paul Ryan (R-Wisc.) about a possible immigration bill.

In the video, the intern shouts: “Mr. President–fuck you!” as the group continues walking down the hallway. Fox News reported at the time that Trump had not walked through the hallway at the time of the intern’s outburst.

LISTEN: As Pres Trump’s entourage entered Speaker Ryan’s office in the Capitol, someone on the other side of the Capitol rotunda yelled: “Mr. President, F—k you!!” (He entered about 15 seconds later): pic.twitter.com/KHp16LYMoF

The news outlet reports that the intern will work with Hassan’s office through August.