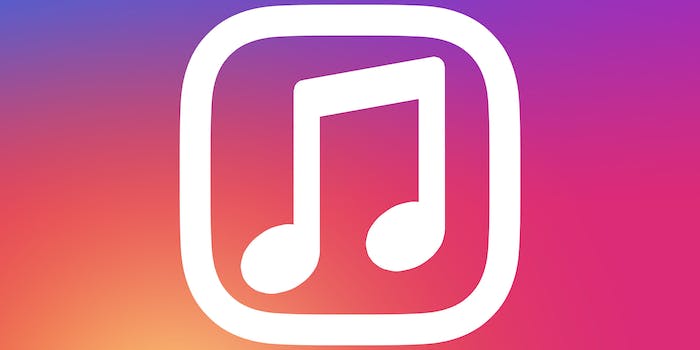 Instagram code hints at a new music feature for Stories

Instagram could reportedly introduce a 'music stickers' option for users.

Code uncovered within the Instagram Android app shows that adding music to your Instagram Stories may soon become much easier. Users may be able to add a feature called “music stickers” to their stories, which would enable audio to play in their photos and videos.

According to TechCrunch, which was tipped off about the discovery of music stickers, music stickers will allow Instagram users to search for and add music to their posts. The code sits alongside the code for Instagram’s other sticker types, such as location sharing and friend tagging. Using the feature, Instagrammers will be able to search for music based on genre type, mood, or what’s currently trending. Presumably once added to a post, it would then play a clip of that song while someone views your story.

Other than that, we can only presume how it will work based on some of Instagram’s other stickers and partnerships. For its GIF stickers, for example, Instagram partnered with GIPHY to power its GIF-sharing functionality. Thus, Instagram could choose to partner with Spotify or another streaming music service for these music stickers. Alternatively, Instagram could work directly with music labels to license a select library of music snippets users could choose from.

Then there’s the matter of what part of a song ends up playing in that music sticker. Instagram may opt to preset what portion of a song plays during your story. This makes the music-adding process very quick but less customized. As some third party apps do for Instagram videos, it could alternatively let users select what portion of a song plays during their story. This might be a more complicated process, but it would enable more detail and creativity for Instagram users.

While it’s something some users have likely been wishing for, adding music to stories will also help Instagram better compete with its main competitor, Snapchat. Snapchat lets users include music already playing on their phone as a soundtrack to their snaps, which Instagram does as well. This goes one step further, however, making the option of adding a soundtrack to your Stories much more straightforward and simple. (Snapchat does offer other music-related features though, such as the ability to Shazam songs from within the app.) This music sticker feature could also help Instagram compete with Musical.ly, a video-sharing app popular with teens that Instagram may also see as a rising threat.

It’s certainly possible that Instagram may not actually ship this feature. And even it does, it’s unclear when we’ll see it land. However, as TechCrunch notes, code-based feature clues of this nature due tend to come to fruition at some point. So if you’ve been waiting for the ability to make your Instagram stories more musical, it may now be just a waiting game.