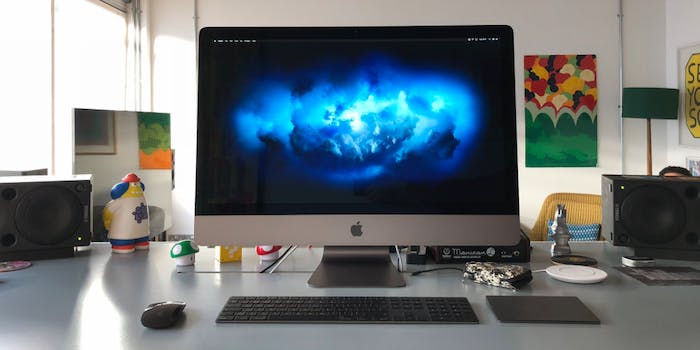 The most expensive iMac Pro model costs more than $13,000

Apple's most powerful machine is also its most expensive.

The iMac Pro, an all-in-one desktop that Apple revealed in June, is now on sale. The machine, meant only for the most demanding users, has a starting price of $5,000.

But if you’re a creative pro, you’ll want to upgrade the base model. As Business Insider points out, the high-end specs we all desire can quickly cause the iMac Pro’s already exorbitant price tag to skyrocket even further, reaching a maximum price of $13,348.

What makes the top-of-the-line iMac Pro so expensive?

We’ll start our build by boosting the Intel Xeon W processor. Increasing the number of cores, which are individual processing units that perform specific actions, from the base eight to the max 18 raises the price by $2,400.

The hard drive is next. Forget about the cloud for a second, 1TB won’t be enough. Four will have to do, bringing our shopping cart to $12,600. There are only two options for the GPU, both from Radeon. The higher-end 16GB Radeon Pro Vega 64 adds another $600.

If we stop there, we’d be shelling out $13,200 after tax. If you want to do any gaming with that powerful GPU, you’ll want to buy yourself a trackpad. Adding the “Magic Trackpad 2” brings the grand total to $13,348 before tax (the estimated tax in my area raised the price another $1,100). Amazingly, the maxed-out iMac Pro would easily have found its way on our “Most Expensive Gaming Computers Ever Built” list. It’s not exactly designed for gaming, but the fact that it costs more than a rig with two Nvidia GeForce Titan GPUs is pretty remarkable.

This exercise probably got you imagining all the other things one could purchase for $13,348, like a new car, 13 iPhone Xs with a case for each, a downpayment on a house, or food for two years. But come on, what’s better than knowing you won’t have to upgrade your computer for a couple of years?