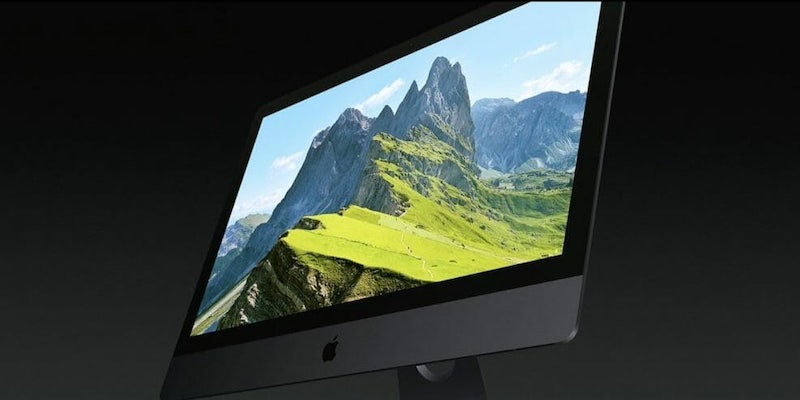 In its jam-packed WWDC keynote today, Apple gave us a “sneak peek” at an exciting new product: the iMac Pro. Landing this December, the iMac Pro is a professional-level desktop machine. It’s remarkable not just for its high-end specs, though—it also looks really slick.

The iMac Pro will be the world’s fastest Mac (and the most powerful). So naturally, it’s got some pretty impressive features. Inside, it has an 18-core Xeon processor and Radeon Vega graphics, capable of powering 44 million pixels onscreen. It also comes with 128 GB of RAM, and in terms of I/O, it’ll have built-in 10 GB Ethernet for super-fast internet speeds, as well as four Thunderbolt 3 ports, which can support up to two 5K displays. And positioned above its display, it also has a 1080p FaceTime camera—because who says you won’t also want to videochat on this machine.

Unlike existing brushed aluminum iMacs, the iMac Pro comes in Space Gray. This darker hue really makes its 5k-resolution display really pop (at least according to the images and renders we’ve seen so far).

What makes the iMac Pro really notable, though, is what that display and those specs mean:

All the specs of the iMac Pro are pretty much EXACTLY what you need to create VR/AR content. Expect a big Apple announcement soon. #WWDC

Indeed, Apple gave augmented reality and virtual reality a much bigger presence onstage in today’s keynote than ever before. Apple even updated its Mac OS (OS X High Sierra) to better support virtual reality development. Apple clearly thinks AR and VR are increasingly important areas in terms of entertainment and utility. Now, developers will be able to use Apple tools to work in these graphically demanding industries.

For those whose computing needs aren’t quite that demanding, though, Apple also updated the rest of its Mac lineup. All of its other iMacs and MacBooks will see a spec bump and ship with OS X High Sierra once it debuts this fall. The iMac line starts at $1,099 for the 231.5-inch iMac (with a special shoutout to the $1,299 4k iMac). On the notebook side of things, MacBooks will get Intel Kaby Lake processors and faster SSDs. Prices start at $1,299, and these notebooks ship starting today.