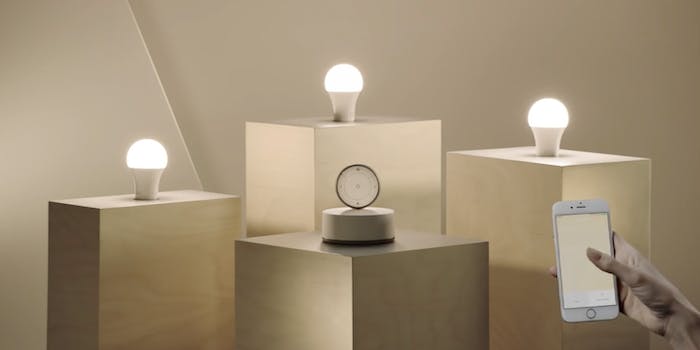 Ikea steps up its game with new smart-home lighting system

Get your smart home features on the cheap.

Ikea furniture has long been the staple of dorms, apartment dwellers, and first-time home owners. It’s cheap enough, robust enough, and good-looking enough to turn even the most budget-strapped pad into an Instagram-worthy modern spread. (At least through your first move or two.) The Swedish furniture magnate is expanding from its DIY roots, though. Soon, you can also outfit your abode with Ikea-brand smart lighting.

It’s called the Trådfri system, which translates to “wireless” in Swedish. Comprised of a variety of lights, switches, and a hub, it’s based on the Zigbee wireless standard—the same that the Phillips Hue system is based off of. Right now, the products in the collection are only available via Ikea’s Swedish-language website, but the items should arrive in stores outside of Europe beginning March 31. (While some of the items are listed on Ikea’s U.S. site, it’s unclear exactly when they’ll debut in U.S. stores.)

The entry-level collection is a set of two lightbulbs, a wireless hub, and a remote control that currently cost around $85. That’s competitively priced against the Phillips Hue Starter Kit, which costs $70 but doesn’t include the remote. Like the Hue (and other smart lighting systems), you can also use a smartphone app to control these lights once they’re installed in your home. Right now, though, IKEA’s system is limited to white-only, so if you want a rainbow of hues for every mood and occasion, you’ll have to go with something different.

Additionally, you can grab an Ikea light and dimmer switch for just over $20. Ikea also offers standalone smart bulbs in varying sizes, brightness, and color temperatures. Apparently, Ikea’s Floalt LED panels and light-up cabinet doors are also Trådfri-ready. That means you can outfit just about any part of your house you want with smart, app-controlled lighting.

If you want to build your own customized wireless lighting system out of these individual components, you can do that by grabbing the standalone $28 wireless gateway on top of whatever other lights or switches you desire.

There are a growing variety of smart home and smart lighting products on the market, but unless you know what you’re looking for, the options can be confusing or overwhelming. Offering a single option at a mainstream retailer such as Ikea could be just the thing to really push smart home products into every home, and not just the homes of early adopters. And starting with smart lighting is definitely the easiest, most straightforward way to do that.