IFTTT launches Do, apps that let you do… whatever you want

If your apps could do anything, what would they do? IFTTT might know.

This is the question IFTTT wants you to answer. And then it wants to make that button. Today, IFTTT (If This Then That) is taking a step toward doing exactly that.

IFTTT has long helped bridge the gap between our smart things and our smart world. The system was one of the first that let us create so-called recipes to trigger all sorts of applications, starting with Web and desktop-based software and moving into hardware, like Nest and Hue’s line of smart lightbulbs. “Everything in the physical world is starting to be represented in the digital world, and so people needed a new set of tools so that they can be creative in their world,” CEO and cofounder Linden Tibbets told me back in December.

At the time, he hinted at what would be next for IFTTT, saying that it wanted to branch out and further define its system. And today, we know exactly what that means: IFTTT has launched a new collection of apps, under a banner called Do.

The collection includes Do, Do Note, and Do Camera. The best way to describe the apps is that they let users easily and quickly program ways to interact with their smart devices without opening multiple apps or needing a lick of programming knowledge. 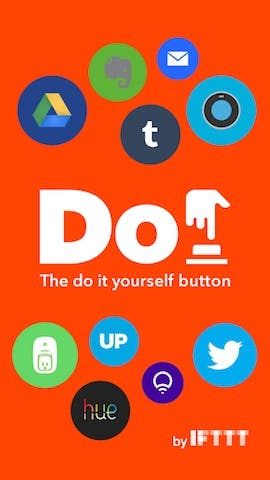 “It’s a button that you can effectively program with a recipe to do exactly what you want to do with the services and devices you use everyday,” Tibbets says. “Every time I push this [Do button], it does something in a very specific Slack room,” he offered as an example when we spoke via Skype. “This Hue recipe lets me dim my lights 50 percent without having to open another app and find where I can do that.”

Tibbets describes Do as allowing users to effectively make their own apps for their smart products and house them all under one icon on their touchscreens instead of many. He says the way you build all these controls under the Do hub is simple enough that anyone can get the hang of it.

Do Note and Do Camera have similar functions to the standard Do, but they get a little more specific. For instance, if you want to change your Hue lights to a shade a green for a moment, you probably haven’t made a specific Do button function for that. And if you only want that to happen for but a second, why would you? With Do Note, you can type “green” and watch your Hue lights react. Type in “72,” and your Nest will reset the temperature.

“It’s like a shortcut,” said Tibbets. And if you’re more of an auditory person, opening up Do Note and speaking out these commands works as well.

Do Camera doesn’t have the smart home bent like Do and Do Note, but instead is just a clever way for managing photos. You can mass upload a specific group of photos to a Facebook album, or email them easily in one tap. It also lets you snap and save important items to Evernote. But the idea behind the entire Do catalog remains here: You can program Do Camera to do whatever you want. Create a channel for posting to Slack, Reddit‘s r/pics, wherever. And I take back what I said about the lack of smart home integration: You can ask your hue lights to match the color scheme of a photo. 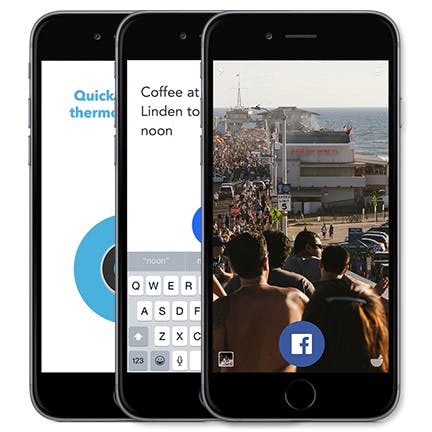 As Tibbets put it, “the biggest change is really recognizing that fundamentally, IFTTT is about automatic, about doing things in the background. Do is about doing things in the foreground, doing things in context.” So how will the launch of the Do brand compete with IFTTT’s existing iOS app? Well, IFTTT is becoming IF. At least, in app form: There’s some name shuffling going on here, so bear with me. The company will remain IFTTT (If This Then That) and underneath that brand, we’ve got IF, its original app, and the Do catalog. IF will stay a sort of one-off recipe-maker for simple and complex functions (email me apartments from Zillow I might like; bump the Nest down to 65 at midnight; tweet out “Happy Thanksgiving!” at precisely the right time), while Do will let you get more specific and house all your smart-device demands in a more organized manner.

Of course, this puts Do and IFTTT in direct competition with the very creators of the smart products and apps it’s enabling. Nest, Hue, Dropcam, Slack, Facebook, Evernote, and on and on all have their own apps that Do sort of circumvents. They’ve been given creative capabilities thanks to IFTTT, but will there be any bad blood over the new apps?

“One of the things that a lot of people are thinking about now is, ‘what does the future of apps look like?’” Tibbets said when I asked about this. “How did we go from taking advantage of a grid of icons across a screen to wanting more? The dominant operating systems are thinking what’s next. Google Now, Siri, these want to help you not open an app. This is a step toward a future where apps aren’t how we control things. 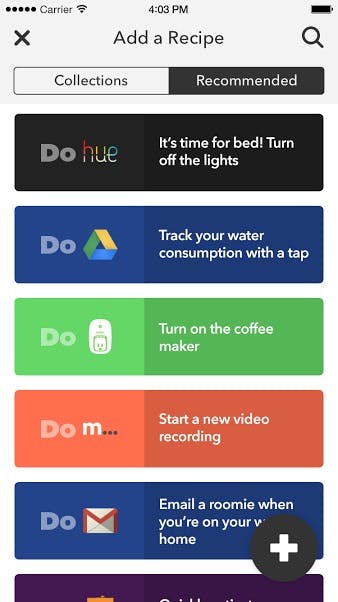 “We’re not pushing away what Slack is, or what Facebook is, but we’re thinking about how to enhance them. In a lot of ways, we’re really respecting those brands.” And maybe doing them one better.

Do has been in the works for “the better part of years,” Tibbets said, and it’s a concept IFTTT plans on evolving. Tibbets said there are even a couple of apps the team held off on for this first launch. For IFTTT, it keeps coming back to one thing: If you had a button, and it could do anything you wanted it to do right when you wanted it to do it, what would it do?