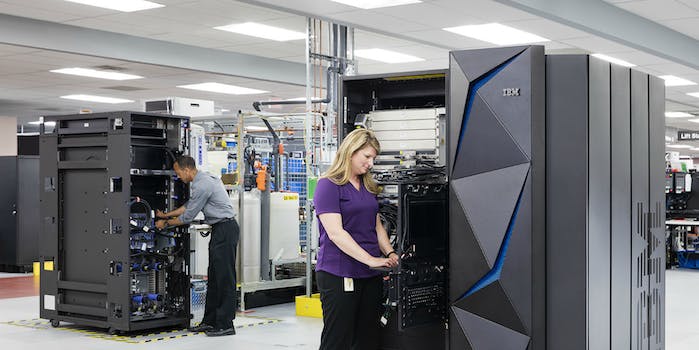 IBM’s Z mainframes can encrypt more data than ever before

The company's computers can run more than 12 billion encrypted transactions per day.

IBM wants to take on hackers by encrypting customer data on a massive scale. The company claims its new Z mainframe (large, high-speed computer) has the power to encrypt all app or service data that is being transmitted or sitting in a database.

That means even if a hacker gets to your personal data, they would not be able to read any of it. It would be like discovering a treasure chest only to find a virtually unbreakable lock on it.

The tech giant told the Washington Post that its “breakthrough” security system will allow every business to encrypt all of its customer’s data, protecting it from the snooping eyes of hackers. The platform will also self-destruct encryption keys the moment it thinks someone is trying to gain access, and regenerates them once the threat is mitigated.

This is all made possible because of the ridiculous power of its new systems, which IBM claims can run more than 12 billion encrypted transactions each day.

“If you take something like Cyber Monday there’s probably about 30 million transactions that go on,” Caleb Barlow, vice president of threat intelligence at IBM Security, told Wired. “So one of these machines can process that kind of crazy workload without even breaking a sweat in less than a day.”

That is 18 times faster than the standard x86 platform, but IBM claims it’s just 5 percent of the cost. To give you a better idea of its speed, the IBM Z can encrypt 13 gigabytes of data every second on each of its roughly 24 chips.

“This represents a 400 percent increase in silicon that’s dedicated specifically to cryptographic processes—over 6 billion transistors dedicated to cryptography,” Barlow said. “So for any type of transaction system we can now get the safety that we’re all after, which just hasn’t really been attainable up to this point.”

The processing abilities of past mainframes has traditionally been a limiting factor when it comes to encrypting data. That is no longer the case thanks to advances in software and hardware that enable IBM Z.

The new mainframe system could pose challenges for the government, which has teetered back and forth on its feelings about strong encryption. Last year Congress wrote a bill called the “Compliance with Court Orders Act,” that would require companies to provide authorities customer data, and to render “unintelligible” data “intelligible” again. The bill was a response to Apple turning down requests from the Justice Department to gain access into the iPhone of a dead terrorist.

“IBM fully supports the need for governments to protect their citizens from evolving threats,” the company said in a statement. “Weakening encryption technology, however, is not the answer. Encryption is simply too prevalent and necessary in modern society.”

According to IBM, hackers have compromised around 9 billion digital data records since 2013. A third of those were in the medical field, and only 4 percent were encrypted. That means all other personal data including social security numbers and credit cards remained visible to hackers.