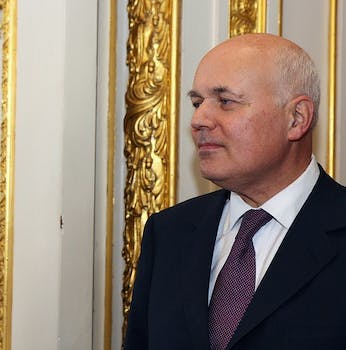 Brits petition conservative politician to live on just £53 per week

As benefit cuts take hold in the U.K., a petition urging Work and Pensions Secretary Iain Duncan Smith to live off £53 ($80) per week for a year has soared in popularity.

A petition urging a politician to live off £53 ($80) per week for a year has soared in popularity as benefit cuts take hold throughout the U.K.

Work and Pensions Secretary Iain Duncan Smith said in a radio discussion that he could live off the sum after a market trader claimed he was left with £53 a week after rent and bills due to housing benefit cuts.

“The reality is what we are trying to make certain is that the amount of money that taxpayers pay sees some value at the end of it in terms of people being supported,” Duncan Smith told the BBC Radio Four’s Today show.

In the wake of the former Conservative Party leader’s comments, a Change.org petition quickly cropped up and has been growing fast. By 10.30am ET Tuesday, it had more than 243,000 signatures.

To compare, the White House’s most popular We the People petition has 350,000 signatures after three months online.

“This petition calls on Iain Duncan Smith to live on this budget for at least one year. This would help realise the conservative party’s current mantra that ‘We are all in this together,'” wrote Dom Aversano, who created the petition Monday. “This would mean a 97% reduction in his current income, which is £1,581.02 a week or £225 a day after tax.”

An attempt to set up a similar petition on the U.K. government’s website was dismissed. Any petition that reaches over 100,000 signatures on that site can trigger a Commons debate.

Aversano told Sky News, “Look at where he is living, the conditions under which he is living. He did a brilliant PR exercise before to depict himself as a compassionate Conservative. He’s nothing of the sort, he’s viciously attacking the most vulnerable and poorest members of society.” Duncan Smith lives in a £2m mansion inherited from his father-in-law.

Duncan Smith wouldn’t be the first politician to live off benefits. One MP tried doing so for a week in the ’80s for a documentary, and failed. More recently, Newark, N.J., mayor Cory Booker lived off food stamps for a week.

Photo by Foreign and Commonwealth Office/Flickr