These armchair engineers think they can improve Elon Musk’s hyperloop

Inventor Elon Musk released 56 pages of details about his theoretical 800 mph train, but Reddit has some additional suggestions.

Elon Musk, the purveyor of all things futuristic, has excited the world’s imagination once again with talk of an 800 mph bullet train that runs on the sun, air and magnets. But Musk says he doesn’t have time to build it, so he’s released his plans to the public.

Now Reddit users have taken it upon themselves to work out the kinks.

On Tuesday, Musk gave unto the internet a 56-page PDF detailing his plan for the Hyperloop, a mass transit system that would allow riders to travel from L.A. to San Francisco in roughly 35 minutes. Using a frictionless air pocket system similar to an air hockey table, and drawing power from the sun, the proposed train could travel at speeds up to 760 mph.

Plans call for the train to run along Interstate 5 in California, connecting that state’s largest two cities. The Hyperloop, as currently envisioned by the founder of Paypal, would launch pods carrying up to 28 people every two minutes (maybe even every thirty seconds at rush hour). Each pod would generate a cushion of air around itself in order to create just enough lift to significantly reduce friction. Electromagnets would accelerate the train, similar to the system used by horizontal-launching roller coasters. And the whole apparatus would be self-powered by solar panels lining the outside of the transport tube.

Musk, the founder of such future-minded endeavors as SpaceX and Tesla Motors, provided quite a bit of detail in his initial proposal (including energy consumption estimates and a potential price point of $20 a ride), but Redditors have started to parse the Hyperloop project for any potential flaws and look for ways to improve the design.

One particular thread, after just 18 hours, already had nearly 5,000 comments. The topics of discussion vary (as one might expect in a 5,000 comment long Reddit thread), but they largely consisted of those eager to daydream of 800 mph West Coast transit or those who wanted to speculate on the technical aspects. 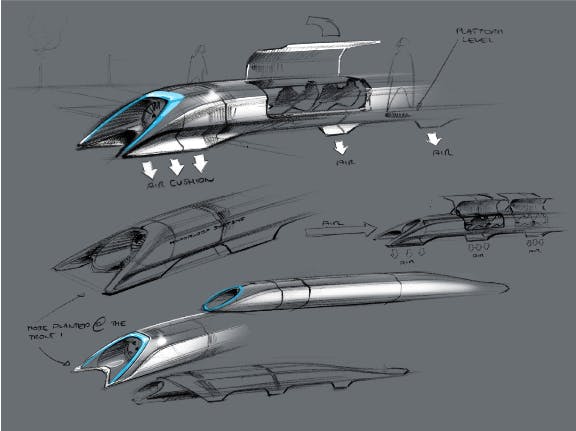 Among the daydreamers, there were those who imagined a future of daily cross-country commutes.

“At 35 minutes a trip, you could live in LA and commute to work in San Francisco,” prophesied Reddit user Tedimon. “It’d be pretty expensive, but in a pinch … “

However, SirAdrian0000 was quick to point out, “I’ve had to pay more [than] that for parking on some jobs I’ve been at, so not really that expensive.”

But among Reddit’s armchair engineers, many were sceptical that the sensitive technology involved could be supersized to cover the distances Musk proposes. Euopean_imposter for instance, questioned how the Hyperloop could maintain a precise air cushion of 0.02 to 0.05 inches with a pod traveling at mach 0.91.

“Nobody has freaked out about the air cushion thing yet,” european_imposter writes. “Ummm, to my layman ears, that sounds highly, highly sensitive. 0.5 mm is a [ridiculously] tiny amount of clearance— hell, the welding seams between sections will stick out more than 0.5 mm! Not to mention expansion and contraction cause by heat or any other sort of tiny distortion of the tube surface. It’s like making a 600 kilometer long air hockey table.”

Other commenters, many of whom were self-professed engineers by trade, were willing to buy into Musk’s vision but questioned long-term maintenance issues.

“To do any significant repairs, they’d have to send a crew out in a repair car, shutting the whole track down until they were done,” wrote ChickenPotDicks. “Obviously, they’d perform their repairs at night, but if they detected debris in the tube via cameras or sensors or whatever on the cars during daily operation, they’d have to shut the whole track down to inspect and remove it. They’re pitching this as more of a commuting system than a travel system, so even being down for an hour would be significant.”

Still other Reddit users looking over Musk’s plan see even more potential. Davebrewer said the excess of electricity generated by the Hyperloop solar panels could conceivably be tapped to create a series of electric filling stations along I-5, stations that could be used to make Musk’s other pet project, the Tesla electric car, even more viable.

“As more Hyperloops are built, a nationwide network of electric filling stations is automatically created without a private company having to foot the bill for infrastructure development,” he said.

Whether the Hyperloop ever comes to fruition, the idea alone seems to have been enough to inspire Musk fanboys to lavish praise.

“I never knew anything about him until Tesla, and I didn’t realize he was also behind SpaceX until last year,” said perspextive. “Holy sh*tballs batman. This guy is on point. He’s like Tony Stark.”