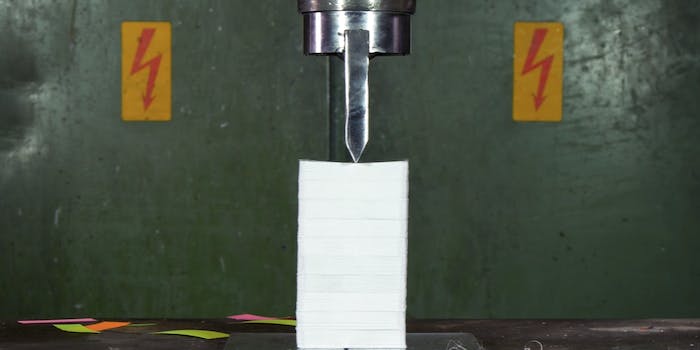 It looks so easy!

On Saturday, a YouTube channel which makes use of a hydraulic press to produce some simply awesome videos uploaded one that really fits the bill. Specifically, the Hydraulic Press Channel, with its 1.8 million subscribers, posted a video of its machine pushing through 10 packs of playing cards, sending them flying outward in the process. They’re basically crushed in half.

It’s just one part of a longer, 11-minute video, but the big moment itself is queued up below. And it’s worth a look.

Thankfully, as ought to be the case for any video of household objects getting wrecked by some sort of industrial tool, there’s also a bunch of slow-motion angles of the cards getting hit by the press. It’s hard to describe why exactly, but there’s something undeniably satisfying about it.

This includes one head-on shot of the cards being decimated, complete with a decidedly operatic vibe.

That’s not all. Anyone who watches long enough will also get to see the hydraulic press go to work on a ball of rubber bands, a tension-releasing crush that’s pretty enjoyable to witness. At the time of this writing, the video has been viewed by more than 350,000 people, and it’s gotten more than 12,000 likes.

And, as one might expect, it’s also far from the only cool thing they’ve produced. The channel is nearly two years old and has dozens of videos to choose from. It’s basically the hydraulic press lover’s wildest dream.