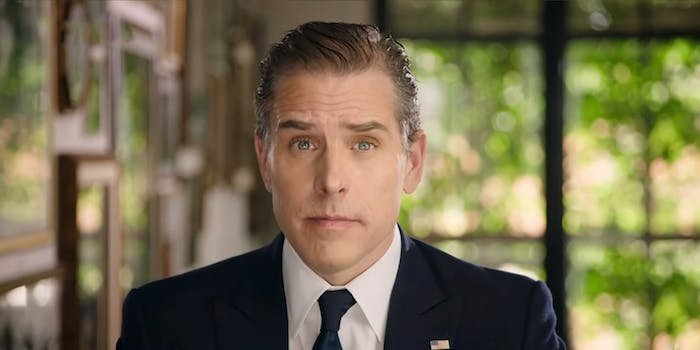 After trying to 'Pizzagate' Hunter Biden, the right is going. full. Q.

Three years ago to the month, the conspiracy known as QAnon kicked off with a doozy of a revelation: Extradition of Hillary Clinton was underway and she was about to face a court-martial for her crimes.

That never happened, but a movement began that rallied behind President Donald Trump and his fight against supposed crimes of prominent Democrats. But with Trump possibly leaving office and Clinton having faded into all but obscurity, what’s a movement to do?

Become obsessed with the crimes of the incoming president’s son. If Biden wins, expect Hunter Biden to become the locus of QAnon.

It’s already begun with alarming similarities. Already there have been accusations of pedophilia against Hunter, which mimic the Pizzagate rumors that swirled around Clinton’s campaign in the feverish last days of the 2016 election.

Now, anonymous users on 4chan are spreading rumors that Hunter Biden is in FBI custody, is speaking to authorities, and is delivering the goods about him and his father’s business dealings. If that sounds familiar… well.

Here’s the quote you may hear about for the remainder of Biden’s presidency, just like you keep hearing about the arrest of “HRC.”

“Hunter Biden has turned himself into the FBI. He was personally interviewed this afternoon by Barr and six other Justice Department lawyers. He has been stashed in a medical facility in Washington D.C. where he is getting treatment for his addictions. So far he has signed statements and provided proof of over 300 million in bribes the Biden family has received in the last 20 years. The funds are hidden in several accounts in Switzerland and Hunter has provided proof that Joe Biden has been accessing those accounts and using funds for years. So far the evidence shows Joe Biden has personally removed over 45 million in cash and used it for personal items. The information has been forwarded to a special unit of the IRS for investigation. Barr will be meeting with Biden on Friday and recommend he either withdraw from the race or face numerous criminal charges. If he withdraws from the race and forfeit all funds in the accounts, the Biden family and specifically Hunter will not face criminal charges.”

Is it true? No. And yet, suddenly, you have some of the same early adopters of QAnon—far-right conspiracy theorists like Jack Posobiec— pushing out on social media the claims that Hunter Biden is under FBI investigation.

Even the president’s personal lawyer, Rudy Giuliani, made the claim. But the former mayor of New York City, who you’d presume is somewhat sourced within the Justice Department, cited conservative commentator and propagandist troll Charlie Kirk.

A better (and right now only) source for the claim comes from Sinclair Broadcasting, which though ostensibly a news organization, is overly pro-Trump in its programming and broadcasting. Sinclair says it’s confirmed the news.

That caused the people primed to accept it to jump.

The story that the FBI is investigating the Bidens might turn out to be true, but given the people throwing it out there, and the muck they know it will cause online in the last days of the election (perhaps identical to a previous vote?), it’s just as likely they’re setting the stage for a new villain in the QAnon extended universe.

The real question is will people care?