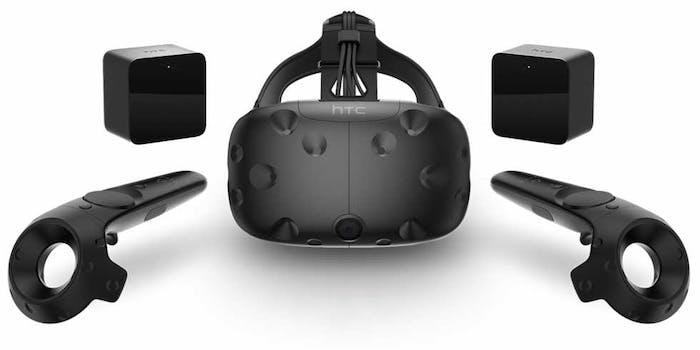 Prepare your wallets for this one.

The announcement came Sunday at Mobile World Congress, where HTC revealed that the consumer version of the Vive, which is powered by Steam VR, would cost $799 once it becomes available for pre-order on Feb. 29 at 10am ET. Some had speculated earlier that the Vive would cost more than the Oculus Rift, which sells for $599, and the new pricing now confirms it.

With the Vive, you’ll receive the headset (that comes with a better headstrap than the one shown at CES), which will let you receive calls, receive and send texts, and check calendar events through Vive Phone Services. It also comes with two wireless controllers (which currently aren’t available for the Oculus Rift) and 360-degree tracking and motion sensors. For a short time, it will come with two VR experiences: Job Simulator and Fantastic Contraption.

“From the beginning, Vive has been at the forefront of virtual reality, with HTC pioneering several ground breaking technologies,” Cher Wang, HTC’s chairwoman and CEO, said in an official blog post. “Since announcing Vive this time last year, we have worked tirelessly with Valve to deliver the best VR experience on the market, winning multiple awards and receiving critical acclaim from media, consumers and the industry. With the Vive consumer edition we are now able to realize our ultimate vision; bringing Vive into homes around the globe so that people can experience immersive virtual reality in a away [sic] that fires the imagination and truly changes the world.”

Pre-orders of the Vive will ship to customers starting in early April 2016.