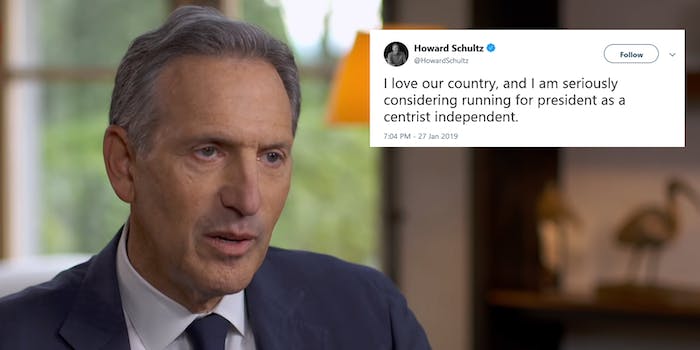 The backlash to his potential 2020 run was swift.

Former Starbucks CEO Howard Schultz drew ire from thousands of people on Twitter on Sunday night when he announced that he was “seriously considering” a presidential run.

Schultz, in his second ever tweet, said he was considering running as a “centrist independent,” causing an avalanche of people on Twitter to criticize his presidential aspirations.

He echoed the idea during an interview with 60 Minutes.

As of Monday morning, the former Starbucks leader’s tweet was thoroughly ratioed, getting 31,000 replies compared to just 2,600 retweets and 14,000 likes.

“I love our country, and I am seriously considering running for president as a centrist independent,” he wrote.

Many people online suggested that Schultz’s campaign would benefit President Donald Trump in the 2020 election.

Nader gave US Bush in 2000. Gore won by over 500K. Would’ve had 15-20 yr. jump on global warming & no 1mil. killed in Iraq. Stein helped give US Trump. Hillary had 3 mil. more votes. Now Schultz wants to give the incompetent criminal moron a 2nd term. Curb your ego! Don’t run!

#Trump is now taunting Howard Schultz because he wants him to run, thus acting as a spoiler and re-electing Trump. Dog help us one and all… we’re doomed. pic.twitter.com/kk8J2wJafq

One of the detractors for a potential Schultz campaign was 2020 Democratic presidential candidate Julian Castro, who told CNN on Sunday that he believed the billionaire’s presidential run would be Trump’s “best hope of getting re-elected.”

Even Trump weighed in on Schultz’s potential run, making a joke about Starbucks paying rent in Trump Tower.

“Howard Schultz doesn’t have the ‘guts’ to run for President! Watched him on @60Minutes last night and I agree with him that he is not the “smartest person.” Besides, America already has that! I only hope that Starbucks is still paying me their rent in Trump Tower!” the president wrote on Monday morning.

Howard Schultz doesn’t have the “guts” to run for President! Watched him on @60Minutes last night and I agree with him that he is not the “smartest person.” Besides, America already has that! I only hope that Starbucks is still paying me their rent in Trump Tower!

Of course, not everyone was against the idea.

Two officials for Unite America, a group that focuses on “electing independent candidates,” called the outpouring of negativity directed at Schultz and the”attempts to suppress” him for his independence “at best anti-democratic and at worst a new kind of political bigotry” in an op-ed published by the Washington Post.

And one person declared they would never vote for Schultz in one amazing thread.

Howard Schultz is in the news, so here's my only Howard Schultz story. Back when I used to work in movie marketing we did a million dollar deal to advertise one of our films in every Starbucks location. It was a big initiative for Schultz, so he flew down to LA for the meeting.

The next day, after everything was signed, Howard's assistant handed me a gift bag and said Howard had really enjoyed meeting me. I was stoked, this was the first gift I'd ever gotten from a billionaire.

I took it back to my office, because I didn't want to make any of my colleagues jealous. I opened it up, and inside was an assortment of loose tea bags. What the fuck? I dumped them on my desk, dumbfounded, and that's when I saw it…

A Starbucks gift card, unlike any I had ever seen. Covered in shiny foil, this thing caught the light from every angle. It was beautiful. I was sure it was a lifetime gift card. I wondered how many were in existence. Surely less than a hundred.

The next day I took it into Starbucks. I wondered if the barista had ever seen one in person. I imagined he might have to call his manager over, and his eyes would go wide, and they'd whisper about me in hushed tones, while the rest of the employees gathered around to gawk at it.

I ordered a triple venti soy latte. I slid the magnificent card to the barista and waited for his reaction. I'll never forget his words: "You still owe fifteen cents."

To celebrate a million dollar deal, Howard Schultz gave me some loose tea bags and a five dollar gift card.

I will not be voting for Howard Schultz for President, and I invite all of you to join me.