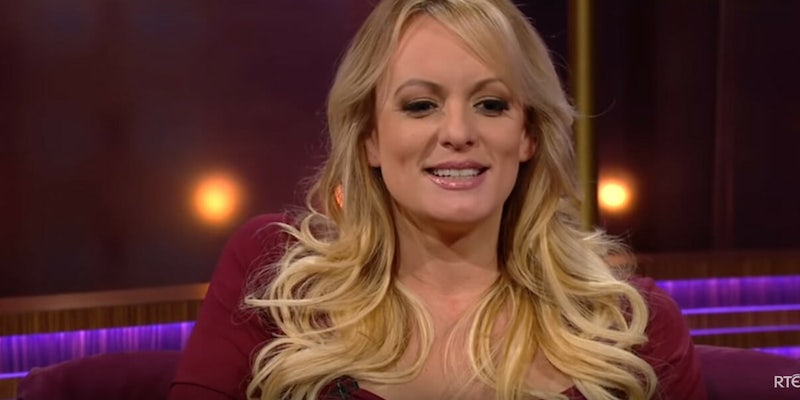 'He's f*cked more people than anybody.'

Stormy Daniels made an appearance Saturday night in Las Vegas at the Adult Video News (AVN) Awards, and she trolled President Donald Trump on the red carpet.

Appearing at a pregame expo event alongside her attorney Michael Avenatti, she quipped that Trump should be in attendance because he “fucked more people than anybody,” according to Inquisitr.

Avenatti later used the event to support universal healthcare and tuition-free college, though the once-darkhorse presidential candidate said in December that he has no plans to run in 2020. As the Daily Dot wrote last month:

Avenatti teased the idea of a 2020 run as his fame grew, even releasing a policy platform on Twitter. But an increased profile caused new scrutiny. His unpaid taxes came to light, and last month he was arrested on a domestic violence charge.

Daniels signed copies of her 2018 book Full Disclosure, which details her alleged affair with Trump and the hush money the president reportedly paid her to keep quiet about it.

The AVNs, held at the Hard Rock Hotel, honor the year in adult entertainment, with categories like “best all-girl group sex scene” and “best actress.”

“‘It’s an honor for me to be here tonight because Bob Mueller and I were co-nominated for an award tonight. It’s a joint award. It’s ‘best domination of a sitting U.S. president,'” Avenatti joked, according to the Daily Mail.

Elsewhere, chart-topper Cardi B made history as the first female rapper to perform at the AVNs, according to XXL, reportedly rocking a 40-minute set for sponsor MyFreeCams. Asa Akira took home best mainstream star of the year honors.