The Internet is no stranger to gruesome images. Actually, they’re a time-honored tradition here in cyberspace.

But while people look at horrific photos out of morbid curiosity, psychologists have found that pictures are actually a good tool to gain insight into people’s political beliefs, including their ideological position, partisan affiliation, and policy preferences—right down to specifics like gun control and immigration.

After showing 83 men and women photos of of maggots, mutilated carcasses, and gunk in the kitchen sink, liberals and conservatives rated the photos almost exactly the same. However, scientists had another tool. They could analyze a brain scan and predict the subject’s politics with 95 percent accuracy, according to a new research paper.

Using an fMRI (functional magnetic resonance imaging) on the subjects’ brains to measure brain activity by detecting changes in blood flow, researchers saw that they could spot conservatives when showing them horrific pictures by noting increased activity in regions like the basal ganglia, thalamus, and hippocampus. 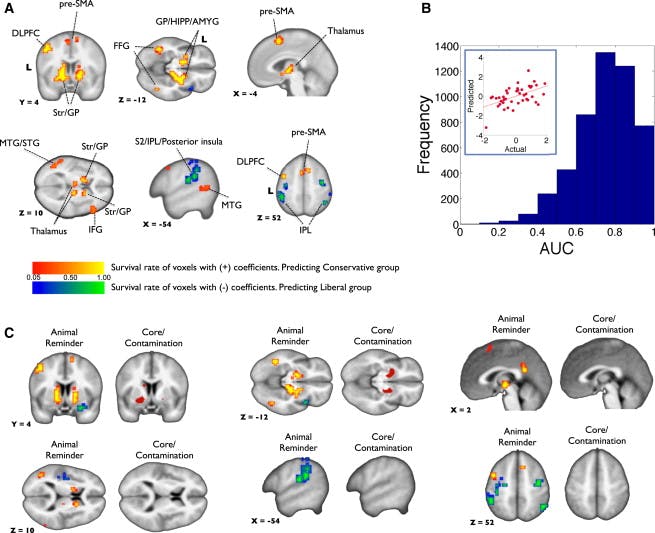 This is a small sample size from a limited geographic area but the results are intriguing. The researchers suggest this shows that, contrary to popular opinion, political beliefs are not purely rational, and that emotion and cognition are “deeply intertwined.”

So the next time you check out that website filled with gore, wear your best tin foil hat. Your brain is giving information away while you’re just sitting there grossed out.